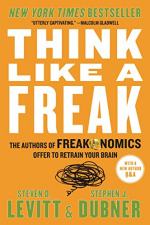 Summary
+Chapters Summary and Analysis
Chapter 1: What Does It Mean to Think Like a Freak?
Chapter 2: The Three Hardest Worlds in the English Language
Chapter 3: What’s Your Problem?
Chapter 4: Like a Bad Dye Job, the Truth Is in the Roots
Chapter 5: Think Like a Child
Chapter 6: Like Giving Candy to a Baby
Chapter 7: What Do King Solomon and David Lee Roth Have in Common?
Chapter 8: How to Persuade People Who Don’t Want to Be Persuaded
Chapter 9: The Upside of Quitting
Important People
Objects/Places
Themes
Styles
Quotes
Topics for Discussion
Order our Think Like a Freak Study Guide

Steven Levitt
This Study Guide consists of approximately 38 pages of chapter summaries, quotes, character analysis, themes, and more - everything you need to sharpen your knowledge of Think Like a Freak.

Think Like a Freak Summary & Study Guide includes comprehensive information and analysis to help you understand the book. This study guide contains the following sections:

This detailed literature summary also contains Topics for Discussion on Think Like a Freak by Steven Levitt.

“Think Like a Freak” by Steven D. Levitt and Stephen J. Dubner is the third in a series of books about freakonomics, a term coined by the authors in their first collaboration. “Think Like a Freak” delves into the mind – yours and mine – and through years of study, experimentation, analysis of valuable feedback as well as the contribution of the works of other pioneers and experts in a variety of fields, the authors have found the key to liberated thinking and now share it with the world.

The authors break down the decision-making process from the external and internal stresses that weigh the decision-maker down to the tradition and conventional wisdom that ever looms and is difficult to break from and break through. The barriers that prevent us from making a clean decision, one that is not wrought with the herd-mentality way of thinking, have all been discovered and exposed by the authors. At times their approach couldn’t be more simplistic. If an individual is not happy in a job, a career, or a relationship he should quit.

Levitt and Dubner stress that “quit” is not a four-letter word. Quitting is smart and healthy when it is obvious that a project is doomed or a relationship has seen its last days. It is best for an individual to walk away from a failure and take with him the valued knowledge learned rather than stay and try to salvage the impossible or breathe new life into a dead horse. Throughout the work, the authors try to take away the guilt and shame of what is traditionally considered failure so that the walking away is made easier. They point out that just like their own experiences through many years of research much more can be gleaned from failure than from success.

Levitt and Dubner further disabuse the reader from the notion that solving problems must be approached holistically. They encourage the reader to go easy on themselves and address just one element of a problem and try to resolve it. The individual will learn more about the problem and then have the experience and insight to perhaps move onto another element of the problem.

Huge problems like starvation and crime are approached by society as a whole incorrectly; however, circumstances and urgency often preclude an in-depth analysis of the root causes of such huge societal and cultural dilemmas. Sending food to starving people does not fix poverty; it feeds starving people. There are on-going efforts to get to the heart of such enormous problems but to achieve success they ultimately must be broken down into parts in order to bring clarity to core causes. The authors apply this approach to the individual. A person’s depression can be temporarily alleviated with anti-depressants; however, it is not a long term fix and much work needs to be done to discover root causes.

There is the silent promise in this book that once a person can break through the societal barriers that include conventional wisdom and cultural mores, he will achieve the ability to think freely about his life and the decisions he must make. He may upset others who steadfastly hold onto old ideas but in the end he will find himself and learn to make decisions that are uniquely his and that will serve him well.

More summaries and resources for teaching or studying Think Like a Freak.

Think Like a Freak from BookRags. (c)2022 BookRags, Inc. All rights reserved.