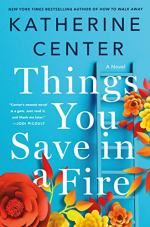 Things You Save in a FIre Summary & Study Guide

Katherine Center
This Study Guide consists of approximately 38 pages of chapter summaries, quotes, character analysis, themes, and more - everything you need to sharpen your knowledge of Things You Save in a FIre.

Things You Save in a FIre Summary & Study Guide Description

Things You Save in a FIre Summary & Study Guide includes comprehensive information and analysis to help you understand the book. This study guide contains the following sections:

This detailed literature summary also contains Quotes and a Free Quiz on Things You Save in a FIre by Katherine Center.

The following version of this book was used to create this study guide: Center, Katherine. Things You Save in a Fire. New York: St. Martin’s Press, 2019.

The novel opens in Austin, Texas. Cassie Hanwell is a 26-year-old firefighter and a rising star of the Austin Fire Department. Ten years ago, Cassie was raped by Heath Thompson a fellow student at her high school. Cassie has been averse to all romantic/sexual intimacy ever since that traumatic experience. Heath Thompson is now a city councilman. Cassie is given a special award for valor, and at the ceremony, she is surprised to learn that Thompson will be presenting her with the award. When Cassie goes to accept the award, Thompson gropes her rear. In a fit of righteous fury, Cassie beats Thompson so bad that he receives a concussion. Cassie is later forced to transfer out of the Austin Fire Department. Cassie reluctantly transfers to a fire department in the town of Lillian, Massachusetts.

Cassie’s mother Diana lives in the nearby town of Rockport, Massachusetts, and Cassie reluctantly agrees to live with her and help take care of her. Diana has recently lost sight in one eye despite only being in her fifties. Cassie resents Diana; ten years ago, Diana left Cassie’s father for another man, and Cassie has not been close with her ever since then. However, Diana is intent on fixing her and Cassie’s relationship. Cassie begins to forgive Diana after Diana tells her side of the story. Meanwhile, at the fire department, Cassie faces some misogynistic dynamics, as she is the first female firefighter in the history of the town of Lillian. Also, Cassie finds herself falling in love with Owen Callaghan, the newest recruit. Cassie suppresses her feelings, as she fears that an illicit workplace romance will end her career.

Cassie repeatedly proves that she is the most skilled firefighter in the department, but the men still seem to have trouble fully accepting her as an equal. Also, Cassie’s efforts to suppress her attraction to Owen are futile. She finds him very attractive, and she likes that he is quite sensitive, selfless, and caring. One day, Cassie agrees to go with Owen to his father’s birthday party. They kiss, and Cassie is surprised by how comforting, pleasurable, and fulfilling the kiss feels. Owen eventually confides in her that he is only a firefighter because his father wants him to be; Owen is highly skilled at cooking and would much rather be a chef.

Cassie begins to receive anonymous threatening notes, likely from a fellow firefighter in the department. The threats only become worse when the captain announces that, due to budget shortfalls, he will have to fire either Owen or Cassie. At around this time, Cassie learns that Diana has a terminal, inoperable brain tumor. The prognosis is that Diana has about one year to live. Diana did not tell Cassie about it because she did not want to cause Cassie further stress. Soon after, Owen becomes trapped under rubble in a burning building. Cassie manages to save him. She soon finds out that the threatening notes were being written by fellow firefighter Anthony DeStasio. Cassie forgives DeStasio. DeStasio then decides to take full responsibility for his misdeeds and accept all consequences.

Cassie and Owen eventually proclaim their mutual love for each other. Owen quite the fire department, and he and Cassie marry and have children. Diana lives for a full year longer than the medical prognosis had predicted. Meanwhile, multiple women sue Heath Thompson for sexual harassment and assault.

More summaries and resources for teaching or studying Things You Save in a FIre.

Things You Save in a FIre from BookRags. (c)2022 BookRags, Inc. All rights reserved.