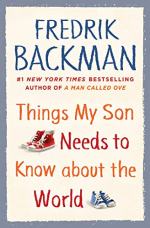 Fredrik Backman
This Study Guide consists of approximately 36 pages of chapter summaries, quotes, character analysis, themes, and more - everything you need to sharpen your knowledge of Things My Son Needs to Know About the World.

Things My Son Needs to Know About the World Summary & Study Guide includes comprehensive information and analysis to help you understand the book. This study guide contains the following sections:

This detailed literature summary also contains Topics for Discussion on Things My Son Needs to Know About the World by Fredrik Backman.

The following version of this book was used to create this guide: Backman, Fredrik. Things My Son Needs to Know about the World. Simon & Schuster Canada, 2019.

This fatherhood love story, written by Swedish novelist Fredrik Backman, is a collection of letters written to his son about the lessons he feels will be important as he grows up. Through short essays, notes to self, and other quirky pieces of writing, Backman creates a light-hearted account of the first year and a half of his son's life.

Fredrik Backman's novel is divided into 13 chapters, each containing various lessons that he feels will benefit his son when he is older. Backman's son, who goes unnamed throughout the novel, is only a year and a half old at the time of writing. Backman is a loving but immature father figure who feels unprepared for the journey ahead. He intersperses pop culture references such as instructions on how to beat the final level of Monkey Island 3 between important lessons.

At the beginning of the book, Backman preemptively apologizes to his son for all the mistakes he will inevitably make as a new father, and stresses that everything he does was in the best of intentions. He continues by diving right into the lessons, starting off with poop, technology and the pressures placed on the modern parent. Technology is a common theme throughout the novel, and Backman explains how it has placed added stress on parents, not allowing them to make the same honest mistakes that the generation before them made. With Google and the amount of information at a click of a button, people have access to all the information of the world, making parenthood even more overwhelming than it already was.

After technology, Backman talks about the popular furniture store IKEA. He uses the store as a setting to highlight the importance of compromise and learning when to pick your battles. In this chapter he claims that though most rules should be followed, such as the arrows that guide you through IKEA, there is leeway to challenge the rules in the case that it will benefit society. Although not particularly fond of the location, he explains that he learned the value of relationships over material items during one of his trips to the store.

Growing up in Europe, the popularity of soccer was all around Backman, and he uses it as a metaphor to explain the value of belonging in a community of likeminded people. He advises his son to find a community of individuals whom he can connect with, whether it is through soccer or something else. He feels that soccer will be the way the two of them stay connected as they grow old.

As the essays continue to flow, Backman's tone becomes more sentimental, and his anecdotes provide more poignant lessons. Instead of discussing trivial matters, such as toy giraffes and sandwiches, he shifts to focus on love and morality. He hopes to teach his son, on the whole, that there is no one answer for anything but that he must try to learn and always work to be the best version of himself- no matter the scenario. He explains that sometimes the line between good and evil can be unclear, and also that, while he does not condone fighting, sometimes life requires you to stand up for what is right.

Backman talks specifically to his son about his relationship with his wife, and describes what he feels is important for maintaining a healthy relationship. He gushes about his wife and hopes that his son will find the type of love him and his wife have found.

To close the novel, Backman shares his near death experience in hopes that he can bestow on his son the value of life and the importance of appreciating every moment.

More summaries and resources for teaching or studying Things My Son Needs to Know About the World.

Things My Son Needs to Know About the World from BookRags. (c)2022 BookRags, Inc. All rights reserved.