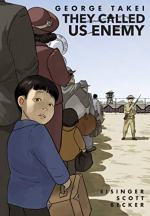 They Called Us Enemy Summary & Study Guide includes comprehensive information and analysis to help you understand the book. This study guide contains the following sections:

This detailed literature summary also contains Topics for Discussion on They Called Us Enemy by George Takei.

The following version of this book was used to create this study guide: Takei, George. They Called Us Enemy. Marietta: Top Shelf Productions, 2019.

They Called Us Enemy is a graphic memoir by actor and activist George Takei chronicling his experience living in Japanese internment camps as a child during World War II. The book opens with George recalling being roused from his bed by his father, who instructed him to get dressed and prepare to leave their Los Angeles home. There were armed soldiers on the porch waiting for the family. George's father, Takekuma, was born in Japan but came to the U.S. as a teenager. He met and married Fumiko, George's mother, who was born in the U.S. but attended school in Japan. The two ran a dry cleaning business together and had three children: George, his younger brother Henry, and their sister Nancy, who was an infant at the time of the war. On December 7, 1941, the family was decorating for Christmas when they heard an announcement about the attack on Pearl Harbor on the radio. The next day, President Roosevelt urged Congress to declare war on Japan, and they complied. Politicians like Attorney General of California Earl Warren and Mayor of Los Angeles Fletcher Bowron made inflammatory statements claiming that the population of Japanese Americans living on the west coast were a threat to national security. In response, Roosevelt signed Executive Order 9066, which resulted in Japanese Americans being forced from their homes and sent to internment camps.

The Takeis were sent first to a detainment facility at Santa Anita racetrack, where they were forced to sleep in horse stables, then on to Camp Rohwer, an internment camp in Arkansas. The family's cabin was hot and small, but they did their best to make it a home. George's father was elected block manager, a representative of the prisoners in dealing with the soldiers who ran the camp. George recalls fond memories of taking a day trip to a local farm, and seeing snow for the first time, as he was a small child and incapable of understanding the significance of the persecution the family was enduring.

In January of 1943, the internees were asked to fill out a loyalty questionnaire, and many viewed this as a personal affront. Two questions in particular caused outrage: one in which the male internees were asked if they would be willing to fight in the U.S. Army, and one in which all internees were asked to pledge an oath of loyalty to the United States. Takekuma refused to answer the former in the affirmative, and felt he could not pledge the oath of allegiance because he was not an American citizen. If he renounced Japan, he would be stateless. Fumiko responded as her husband did to ensure that the family would not be separated.

Many of the men who refused to enlist in the army were sent to Leavenworth Prison. The Takeis were sent to another, harsher internment facility, Camp Tule Lake in California. Many of the internees there had been radicalized by their treatment by the U.S. Government and were openly championing the Japanese cause. This led to violent clashes between the internees and the guards. In 1944, President Roosevelt enacted Public Law 78-405, which permitted people of Japanese descent to renounce their American citizenship. The government hoped to trade those who chose to repatriate to Japan in exchange for American citizens being held there. Because Takekuma was not a citizen, Fumiko chose to renounce, once more hoping this would ensure the family stayed together. In August 1945, the U.S. military dropped atomic bombs on the Japanese cities of Hiroshima and Nagasaki. Fumiko was devastated, because her family still lived in Japan.

Shortly thereafter, the internees learned that Japan had surrendered and the war was over. Fumiko was scheduled to be repatriated back to Japan, but a Civil Rights attorney named Wayne Collins stepped in to defend her and the other internees who had been coerced into renouncing their citizenship. The Takeis returned to Los Angeles and ultimately reopened their dry cleaning business. George went on to attend UCLA where he studied theater. He was also politically active in the Civil Rights movement. He acted in several small roles in television and film before the securing the part of Lieutenant Hikaru Sulu on the show Star Trek, which turned him into a household name. He continues to speak about his experiences in the Japanese internment camps, as he believes it is vital that people have a working knowledge of history, lest we repeat the mistakes of the past.