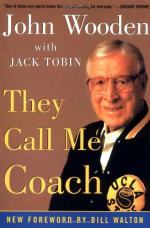 They Call Me Coach Summary & Study Guide includes comprehensive information and analysis to help you understand the book. This study guide contains the following sections:

This detailed literature summary also contains Topics for Discussion and a Free Quiz on They Call Me Coach by John Wooden.

They Call Me Coach by John Wooden is a recounting of the coach's most memorable coaching moments, the life lessons he learned, and the ones he taught.

Wooden goes into great detail to discuss the foundation of success. He says true success must be built upon a solid foundation of various character traits. He outlines these traits in his "Pyramid of Success." Wooden says that "success is peace of mind which is a direct result of self-satisfaction in knowing you did your best to become the best that you are capable of becoming."

In the book, Wooden talks about the importance of a coach and teacher as a role model. He tailored his role as coach and teacher after his own father, a nurturing man who believed in working hard and the benefits of a good education.

Wooden also talks about stubbornness - his own and some of his past players. He points out that it is important to stand up for what one believes is right, but that one must also be willing to concede when one's opinion is the wrong one. He respects most of the players who have stood up to him over the years because their stubbornness made him step back to look at their side of the issue. They in turn respected him because they saw the he was trying to get a glimpse of their point of view.

The reader learns the value of a coach who can bring out the best in a group of individuals to create a unique team that successfully works together. Wooden says a love for all people is a trait needed in order to accomplish results within a team setting.

It seems as though Coach Wooden could have had a very successful career in the pro leagues. However, he chose to teach. He asked his college coach for help when considering a job on the pro basketball league. The coach reminded him that he'd spent time earning a valuable education. Did he want to give that away to create possible stardom?

Wooden chose the coaching route, knowing this would give him the opportunity to use his education to the fullest while making a great impact on many young lives.

Wooden's love for teaching is obvious in this book. He loves teaching by example. He believes he cannot ask his basketball players do do more than he would expect of himself. He requires a short haircut and a practice uniform to be worn at each practice.

They Call Me Coach from BookRags. (c)2022 BookRags, Inc. All rights reserved.