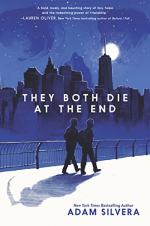 They Both Die at the End Summary & Study Guide

Adam Silvera
This Study Guide consists of approximately 57 pages of chapter summaries, quotes, character analysis, themes, and more - everything you need to sharpen your knowledge of They Both Die at the End.

They Both Die at the End Summary & Study Guide Description

They Both Die at the End Summary & Study Guide includes comprehensive information and analysis to help you understand the book. This study guide contains the following sections:

This detailed literature summary also contains Quotes and a Free Quiz on They Both Die at the End by Adam Silvera.

The following version of this book was used to create the guide: Silvera, Adam. They Both Die at the End. HarperTeen, 2017.

The novel opens with Mateo Torrez receiving an alert from Death-Cast: today he will die. He laments the missed opportunities and regrets spending so much time alone in his room. Preparing to leave the house, he quickly retreats back inside, already afraid of what the day will bring. Around the same time, Rufus Emerito receives the same alert while beating up Peck, the new boyfriend of his ex-girlfriend, Aimee. After letting the herald of the alert understand how angry he is, he returns to Peck and tells him that Aimee “would’ve taken me back eventually” (21). Peck scrambles away and Rufus is left with his two friends Malcolm and Tagoe who take him home.

While Mateo still struggles with leaving his house, Rufus is riding his bike back home. Stopping outside of a church he visited with Aimee, Rufus texts Aimee to let her know he received an alert from Death-Cast that it is his End Day. Aimee promises to meet him back as Pluto, the foster home. When Rufus returns home, he looks over his room and reflects on all the memories he made with the Plutos (Malcolm, Tagoe and Aimee).

Mateo spends most of the morning cleaning and scrolling through the website CountDowners, a forum for Deckers--the people alerted by Death-Cast. He decides upon a headstone: “Here Lies Mateo: He Lived for Everyone” (41). Not wanting to live his last day alone, Mateo downloads the app Last Friend. He creates a profile, chooses a picture and waits to connect with someone. Although he receives messages from quite a few people, most have little to do with finding a friend and are rather quite vulgar requests.

At the same time, Rufus is having his funeral at Pluto. The doorbell rings and Aimee appears at the door, angry. She yells at Rufus, “Are you kidding me?” and reveals a bloody Peck behind her (49). Although she is angry, Aimee softens as she speaks to Rufus and tells him that she loves him. Tagoe comes to retrieve Rufus for his funeral. Just as Aimee begins her speech, the police show up to the house, courtesy of Peck. The Plutos push Rufus out the house and he escapes on his bike. He races down the road and stops outside of a McDonalds, unsure what to do. Turning around, Rufus sees an advertisement for the Last Friend app, and although apps “aren’t really [his] thing,” he hopes that a Last Friend might be able to “drag out” the good Rufus (71).

After an uneventful morning playing video games and contemplating the many books on his shelf that will go unread, Mateo reopens the Last Friend app. He clicks on the profile of Rufus and sends him a message. Going back and forth, Rufus discovers that Mateo has yet to leave his house and asks to video chat. Reflecting on the deaths of his family, Rufus asks Mateo if he will be okay with the chance that he could have to watch Rufus die. Mateo nods, but Rufus tells him that he will have to get out of the house and “go for it” (77). Inspired, Mateo agrees and they promise to be friends--the only stipulation being that Rufus has to meet Mateo at his home. Rufus agrees and they hang up. Mateo waits and decides that “no matter how we choose to live, we both die at the end” (79).

As Rufus arrives at Mateo’s house, Mateo is finishing notes for his neighbors, informing them of his death. They step out of the house, cautious about the smallest dangers. They first go to see Mateo’s dad who has been in a coma for two weeks. On their way to the hospital, Rufus gets into a party train on the subway while Mateo opts for the quieter car behind him. Although Mateo tells Rufus that “that’s just not my scene,” he confesses that he thinks the party car is his scene but that “the fear of disappointing others or making a fool of myself always wins” (108-109).

When they arrive at the hospital, Mateo leaves his father a note and sings to him. Rufus walks in and Mateo is embarrassed he caught him singing. Coming out of the hospital, Mateo notices a homeless man rooting through the trash and offers him money from himself and Rufus. Rufus is stunned once again by Mateo’s kindness. Thinking it’s too early to say goodbye to Mateo’s friend Lidia, Rufus suggests getting breakfast at his favorite diner, Cannon Cafe. They talk about “not second guessing themselves” and what they saw themselves doing in life (135). When Rufus suggests leaving, Mateo nervously replies “leaving is dying” but stands to go see Lidia (139).

On their way to see Lidia, Mateo tells Rufus about how Lidia’s boyfriend died right before her daughter Penny was born. At Lidia’s house, Mateo laments about how he will not get to be a part of Penny’s life growing up. Just as he thinks that Lidia is catching on that it is his End Day, he leaves money on the counter and leaves to throw out the trash, dashing out the front door.

Soon after, Rufus receives a call from Aimee, telling him that Malcolm and Tagoe are in jail. Mateo runs away, scared and not sure “what Rufus was involved in that led to his friends being arrested” (169). Rufus catches up with Mateo and explains everything, even telling him what happened to his family when they died. Mateo understands, telling Rufus that “people make mistakes” (173).

After trying out the Make-A-Moment station--giving them a less than stellar experience in “skydiving”--Mateo tells Rufus that he wants to visit the cemetery where his mother is buried. When they arrive at the cemetery, Mateo comes face to face with two men beginning to dig what will be his own grave. Rufus gets the men to leave and Mateo spend some time alone with his mom, asking her to “look after him” (220). Sitting in his grave, Mateo and Rufus talk about the afterlife and whether they believe in fate.

After Mateo takes Rufus to the Hudson River to cope with the death of his family, the boys go to a bookstore. In the middle of buying postcards, a bomb goes off in a nearby gym, shattering the glass and leaving people bruised in the street. Although the two are shaken up, they summon courage to keep going and hop onto Rufus’ bike. They get to a subway station and pretend on the ride that the stops are all places that remind them of something they did in life: a concert, getting a tattoo and the stop for work.

Leaving the subway, Mateo calls Lidia and has her meet him at the World Travel Arena, a space which allows Deckers and the general public to “travel” the world from New York. The group “travels” to London, Jamaica, Africa and China. In Puerto Rico, Rufus leads the group to a room titled “Rainforest Jump.” Making their way to the top of a waterfall, the three hold hands and jump. Coming up laughing and smiling, Rufus suggests that the go to this “underground dance club pub” for Deckers (290).

On their way to the club, Rufus receives a call from Malcolm and Tagoe and he tells them to meet him at the club. He hangs up and takes a picture of the club for Instagram -- a mistake, as Peck has been waiting for Rufus to post his location in order to exact his revenge.

At the club, Rufus and Mateo decide to sing a song together. They choose ‘American Pie’, and as the two make their way to the stage, Mateo tells Rufus “the time of my life, Rufus. I’m having it. Right now” (306). When they finish the song, Mateo pulls Rufus behind the stage and kisses him, telling him that “the best thing about dying is your friendship” (308). Smiling, Rufus gets even more excited seeing the Plutos have arrived.

Everyone is introduced and makes their way to the dance floor. Mateo drifts off with Lidia and asks her to “keep moving,” despite the fact that he will be gone (323). Suddenly, he realizes that something is wrong and sees Peck at the entrance to the club. He has a gun and everyone in the club begins to run. Mateo comes up behind Peck and punches him in the face. Rufus grabs the gun and unloads it, running out of the club with Mateo.

Exhausted over the fight, Mateo asks Rufus if he would come home with him. He laments that it is his first time bringing someone home and there is no one for him to meet. They go into his room and Rufus begins taking photos of a smiling Mateo, an “awesome unrecognizable Mateo” (338). They lie in bed together and Mateo tells Rufus that he loves him. Rufus asks whether finding each other is what will kill them, but Mateo replies that “maybe it’s better to have gotten it right and been happy for one day instead of living a lifetime of wrongs” (345). Smiling and holding each other, they fall asleep.

Mateo wakes up about an hour later and goes to make tea for a sleeping Rufus. He turns on the stove which erupts into flames. Rufus wakes up and smells smoke. He makes it to the front door, but then plunges back into the flames when he realizes Mateo is not there. He drags him out and the ambulance arrives, declaring Mateo dead.

Rufus is sent to the hospital. He calls Lidia from there to let her know Mateo is dead. He wants to visit Mateo’s dad and tell him how brave Mateo was. Rufus goes to see Mateo’s father and shows him all the pictures of their adventures from the day. He writes him a letter, sharing with him his Instagram profile to “see how he lived” (366). Leaving the hospital, Rufus makes his way to Althea Park. He listens to a video of Mateo singing and crosses the street “without an arm to hold [him] back” (368).

More summaries and resources for teaching or studying They Both Die at the End.

They Both Die at the End from BookRags. (c)2022 BookRags, Inc. All rights reserved.