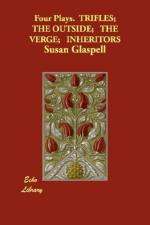 Get The Verge from Amazon.com
View the Study Pack
View the Lesson Plans
Study Guide
Order our The Verge Study Guide

Books Like The Verge by Susan Glaspell | Suggested Reading

Susan Glaspell
This Study Guide consists of approximately 68 pages of chapter summaries, quotes, character analysis, themes, and more - everything you need to sharpen your knowledge of The Verge.

Trifles (1916) is Susan Glaspell's most famous work. This one-act play is a murder mystery that explores the different way in which men and women see the world. It is recognized as an early example of a play that portrays "female bonding."

Charlotte Perkins Gilman's The Yellow Wallpaper (1899) is a short story that explores a woman's slow descent into madness. It is a staple text for feminist historians.

Elmer Rice's play The Adding Machine (1923) explores the effect the machine age has had upon man . It is still a widely-studied and widelyperformed piece of expressionistic drama.

Virginia Woolf's To the Lighthouse (1927) is a stream-of-consciousness novel, a style that was popular in the 1920s . It is considered to be one of the most important works of feminist fiction of all time

The Complete Poems of Emily Dickinson (1976), compiled by Thomas H. Johnson, is...

More summaries and resources for teaching or studying The Verge.

The Verge from Gale. ©2005-2006 Thomson Gale, a part of the Thomson Corporation. All rights reserved.