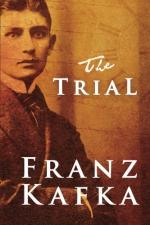 Get The Trial from Amazon.com
View the Study Pack
View the Lesson Plans
Study Guide
Order our The Trial Study Guide

Books Like The Trial by Franz Kafka | Suggested Reading

Franz Kafka
This Study Guide consists of approximately 34 pages of chapter summaries, quotes, character analysis, themes, and more - everything you need to sharpen your knowledge of The Trial.

Kafka's 1915 story, The Metamorphosis, begins: "As Gregor Samsa awoke one morning from uneasy dreams he found himself transformed in his bed into a giant insect."

Published in German in 1919, Kafka wrote The Penal Colony in 1914. Some see a reflection of trench warfare in this story about law and punishment told by a traveling anthropologist.

Kafka wrote the The Blue Octavo Notebooks while spending a happy vacation with his favorite sister, Ottla. This work is a book of proverbs, reflections, and literary sketches.

Written in 1922 but not published until 1926, The Castle tells the tale of a surveyor (K.) who answers a work summons. He arrives at the town below the Castle but the town officials do not know what he is talking about. K. tries to catch the attention of a Castle official named Klamm but fails.

Kafka agreed to the...

More summaries and resources for teaching or studying The Trial.

The Trial from Gale. ©2005-2006 Thomson Gale, a part of the Thomson Corporation. All rights reserved.