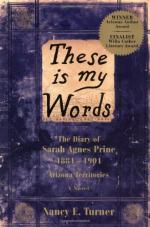 These Is My Words Summary & Study Guide

Nancy E. Turner
This Study Guide consists of approximately 38 pages of chapter summaries, quotes, character analysis, themes, and more - everything you need to sharpen your knowledge of These Is My Words.

These Is My Words Summary & Study Guide Description

These Is My Words Summary & Study Guide includes comprehensive information and analysis to help you understand the book. This study guide contains the following sections:

This detailed literature summary also contains Topics for Discussion and a Free Quiz on These Is My Words by Nancy E. Turner.

These Is My Words is the story of Sarah Prine and her family who agree to follow their father's dreams to head west. The trip is eventful and Sarah's young brother, Clover, is bitten by a snake and dies on the way. Her older brother Ernest is shot in the knee by an arrow and loses his leg. In that same battle, Sarah's father is shot, but the wound is all the way through his arm and seems to be of little danger. However, shortly after the family arrives at their destination, her father drops dead from complications from the wound. Without the guidance of their father, the family - Sarah, her brothers Albert and Harland, and her Mama - decide to buy trees and return to the Arizona Territory to make their home. Albert marries a young girl he met on the way west and Savannah becomes more of a sister to Sarah than any blood relative could possibly have been.

As the group moves eastward under the guard of soldiers who are charged with protecting the settlers from Indians, Sarah becomes acquainted with a commanding officer, Captain Jack Elliot. Jack is strong and domineering and Sarah declares that he is ornery and coarse from the start. When Sarah finds the mutilated body of a young woman and asks Jack to take care of it without upsetting her Mama and Savannah, Jack falls in love with Sarah.

When the family chooses a place to settle, Sarah sends a letter to Jimmy Reed, a young man who had lived with them after his own family died of cholera, and Jimmy joins them to start a horse ranch. Jimmy proposes to Sarah and she believes marriage to be the right decision, and so accepts. They have a daughter, April, but Jimmy grows cold. When Jimmy is dying after having been thrown from a horse, Sarah learns that he's always held to his love for a woman who had spurned him.

Dealing with the ranch and a new child is difficult and Sarah is soon visited by Jack. After some time passes, he asks her to marry him, and when Sarah comes to believe that he loves her, she agrees. The years pass quickly with Sarah giving birth to four more children. One dies at birth and a daughter dies as a child. Jack finally gives up the military career and dies in a burning building, doing his job as fire chief. After his death, Sarah packs up to move back from the city to the ranch she'd built, accompanied by two of her children and Jack's father, Chess.

More summaries and resources for teaching or studying These Is My Words.

These Is My Words from BookRags. (c)2022 BookRags, Inc. All rights reserved.