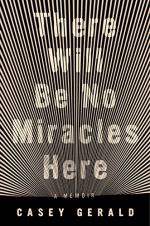 There Will Be No Miracles Here Summary & Study Guide

Casey Gerald
This Study Guide consists of approximately 51 pages of chapter summaries, quotes, character analysis, themes, and more - everything you need to sharpen your knowledge of There Will Be No Miracles Here.

There Will Be No Miracles Here Summary & Study Guide Description

There Will Be No Miracles Here Summary & Study Guide includes comprehensive information and analysis to help you understand the book. This study guide contains the following sections:

This detailed literature summary also contains Topics for Discussion on There Will Be No Miracles Here by Casey Gerald.

The following version of this book was used to create the guide: Gerald, Casey. There Will Be No Miracles Here. Riverhead Books, 2018.

Casey Gerald’s memoir, There Will Be No Miracles Here, chronicles his journey from Oak Cliff, Texas — an economically depressed suburb of Dallas — to Yale University and beyond. Casey grew up in the shadow of his father, Roderic, a celebrated football player, who, after being given cocaine to enhance his performance in an important game, slowly succumbed to drug addiction. He spent much of Casey’s youth in prison and/or rehabilitation centers. Casey’s mother, Debra, struggled with mental health issues and disappeared frequently, for days or years at a time; she was likewise institutionalized throughout Casey’s youth. Casey and his older sister, Tashia, only occasionally lived with either of their parents (whose relationship had fallen apart in the interim) and instead crashed with grandmothers and aunts throughout their early youth before finally moving into an apartment together. In pursuit of the adult approval that he could not get from his absentee parents, Casey applied himself assiduously to his schoolwork and proved himself a gifted student. Like his father, he played football from middle through high school and, in his senior year, Casey was recruited to play for Yale University.

Throughout his teenaged years, Casey struggled with his homosexuality; he had been pressured by various relatives to perform their version of heteronormative masculinity and so he remained closeted. The advent of the internet offered Casey the means to explore his sexual identity and he began a long-distance relationship with Red, who lived in Shreveport. The relationship fell apart due to Casey’s ambivalence, which was rooted in his religious belief that homosexuality was morally reprehensible and would keep him from having a pure relationship with Jesus. Nevertheless, before leaving for New Haven Casey met another young man, River, with whom he eventually had a long-distance relationship during college.

At Yale, Casey encountered both classism and racism from his more privileged peers and he felt miserable and alone. He fought with his teammates, rebuffed people’s attempts to befriend him, and gave vent to his antagonism on Facebook. His only comfort came from his freshman year English class. By sophomore year, some of Casey’s vitriol had cooled, and he formed an alliance with his fellow underclassmen on the football team to train harder than their upperclassmen counterparts. Come junior year, Casey had established himself as a stellar player, excellent student, and independent visionary, and together with his classmate helped to found the Yale Black Men’s Union, eventually serving as the fledgling organization’s first president. In his senior year, Casey was a Rhodes scholar finalist and an member of the elite Wolf’s Head secret society. By graduation, he had earned a reputation among his peers for unscrupulousness.

At some point Casey attended Harvard Business School, though it is unclear as to whether he did so immediately after graduation. In any event, Casey had long been entertaining the idea of a career in politics and seeking out high-profile internships and jobs toward that end. Casey attended a summer program for young diplomats in Berlin, served as special advisor to Maria Shriver at the Center for American Progress, and even began to strategize a campaign in Dallas County’s 30th congressional district. However, when Casey realized that his long-concealed homosexuality might present obstacles to election, he stopped planning in order to reckon with how he had neglected his relationships and himself in pursuit of the American dream. He moved to New York, then to Harvard, and finally settled in Austin. In the book’s last chapter, Casey reunites with River, and it seems as though the two might give their relationship another try.

More summaries and resources for teaching or studying There Will Be No Miracles Here.

There Will Be No Miracles Here from BookRags. (c)2022 BookRags, Inc. All rights reserved.