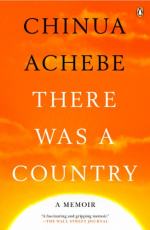 There Was a Country Summary & Study Guide

There Was a Country Summary & Study Guide Description

There Was a Country Summary & Study Guide includes comprehensive information and analysis to help you understand the book. This study guide contains the following sections:

This detailed literature summary also contains Topics for Discussion on There Was a Country by Chinua Achebe.

“There Was A Country” by Chinua Achebe is a memoir of Chinua’s early life in the Eastern Region of Nigeria where his people, the Igbo, were the dominant ethnic group. Always drawn to storytelling, Chinua eventually found himself and rejected a full scholarship to medical school once he succumbed to the allure of the arts, especially writing.

As he matured and was educated at the University College in Nigeria, it became his goal to develop with other young colleagues an honest voice for the Dark Continent. Chinua’s dream was to establish African literature that was written by Africans and that would be embraced by the rest of the world. He felt the strong need for African stories to be told by Africans. The Dark Continent was under colonial rule when he was a young man and he and many of his fellow young intellects saw the dire need for independence from their colonial master, Great Britain, so that they could spread their wings and soar.

While Chinua tells the story of his childhood, education, marriage and fatherhood and goals and dreams as an elite writer and intellect, he tells quite another story in its backdrop. He provides a very different account, a dark and ominous one that runs parallel with the hopes and dreams of a young writer and of a young nation. In 1960 after Nigeria had been under British colonial rule since 1914, they had growing pains and a strong desire for independence. The British who had exploited the African nation’s rich resources and fattened their coffers for decades recognized it was time to cut ties.

Nigeria won its freedom in 1960. There was great hope in the sovereign nation that the lives of its people would be enriched and their futures bright and hopeful. However, the nation quickly devolved into an abyss due to its weak leadership, corruption and bent toward ethnic oppression. Suffering more than any other segment of the nation was the people of its Eastern Region, in particular the Igbo who was the dominant ethnic group in the east but a hated minority by those who now ruled Nigeria.

In 1967, it was time for the Eastern Region to break away from the nation of Nigeria. But this time the motherland was not nearly as understanding or accommodating. The Nigerian government would not allow the secession of the Eastern Region that now had the temerity to declare itself the independent Republic of Biafra. A civil war ensued for the next three years. The Nigeria-Biafra War with its horrific atrocities and excessive bloodshed is considered to be the worst conflict in the history of man.

During these times of unbelievable strife, fear and oppression, Chinua Achebe’s number one goal was to protect the lives of his wife and children. But he never lost sight of his goal to elevate the writings of Africans to a level that would be respected and honored throughout the world of literature and one that would represent the real true voice of Africa.