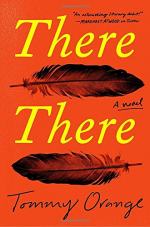 There There Summary & Study Guide

Tommy Orange
This Study Guide consists of approximately 117 pages of chapter summaries, quotes, character analysis, themes, and more - everything you need to sharpen your knowledge of There There.

There There Summary & Study Guide Description

There There Summary & Study Guide includes comprehensive information and analysis to help you understand the book. This study guide contains the following sections:

This detailed literature summary also contains Quotes and a Free Quiz on There There by Tommy Orange.

The following version of this book was used to create this study guide: Orange, Tommy. There There. New York, Alfred A. Knopf, 2018. HC.

The Prologue describes stereotyped images of Native heads, including: a TV test pattern; the heads of the historical Metacomet and the fictional Murieta; a Cheyenne story of a rolling head; and Mel Gibson’s heads rolling down temple steps. These stories of oppression bear witness to deep violence. When Indians are forced to integrate, they form communities instead, finding an urban connection to the land.

Tony Loneman is a 21-year-old Cheyenne man living with his grandmother Maxine. He has fetal alcohol syndrome—“the Drome”—but also street smarts. His trouble starts when he bonds with his weed supplier, Octavio, over their love for their grandmothers. Octavio plans to rob a powwow and recruits Tony to hide the bullets in advance.

Dene’s long-absent alcoholic uncle Lucas visits. He is a boom mic operator but dreams of making a movie about Oakland’s Indian community. When Lucas dies, Dene decides to carry out his uncle’s artistic vision. He applies for a cultural arts grant. The grant panel worries about Dene’s lack of a cohesive vision, but they approve the grant for its promise of documentation.

In 1970, Opal Bear Shield, her sister, Jacquie Red Feather, and their mother, Vicky, move to Alcatraz to participate in the occupation. Opal’s teddy bear, Two Shoes, gives Opal spiritual encouragement to join Jacquie and the teenagers. One night, Opal finds Jacquie screaming at Harvey: “I told him not to. Then he did” (56). Vicky moves the family back to Oakland but soon dies of her cancer when she refuses medical treatment. Opal and Jacquie stay with her adopted brother, Ronald. They secretly agree Jacquie will have her baby and give it up for adoption.

Edwin has been constipated for days. With his phone and computer broken, he contemplates the four empty years since he graduated and the 100 pounds he has gained. He resents the contempt of his mother’s boyfriend, Bill. Suddenly, his computer produces a Facebook notification. Edwin has contacted the Harveys on his mom’s account to try to find his father. One of them has replied, and they agree to meet at the Big Oakland Powwow, which Harvey will emcee. When Edwin’s mom, Karen, comes home from work, she and Edwin argue about progress and ambition. Edwin agrees to consider an Indian Center internship. In his room, he tries a sit-up, and his bowels loosen with a feeling “not unlike hope” (78).

Part Two, “Reclaim,” opens with Bill, the Oakland coliseum’s Lakota janitor. He is naturally pessimistic but stays positive out of love for his girlfriend, Karen. The coliseum is important to him: baseball gave him something to care about after Vietnam, and he has now worked here for decades. He sees a drone over the stands and chases it, but it escapes.

Calvin’s brother, Charles, appears in his living room. Calvin believes Charles and his friend Carlos set him up to be robbed of his marijuana, but either way they need money quickly to pay for the lost weed. They go to Octavio’s house, where after a drunken fight they agree to participate in Octavio’s powwow scheme, though Calvin sits on the powwow committee.

Jacquie attends a substance abuse and mental health conference, only ten days sober herself. The conference speaker recalls the violent suicide of his young brother and it triggers memories of Jacquie’s own daughter’s suicide. She texts Opal, who is raising Jacquie’s three grandsons. She opens all of Opal’s emailed photos for the first time. At an AA meeting, Jacquie meets Harvey again. She tells the story of her rape, her first daughter’s adoption, and her second daughter’s addiction and suicide. Harvey offers to drive her to Oakland to reconnect with her family. She takes ten bottles of alcohol to the pool and throws them in. She texts Opal that she may visit.

Orvil Red Feather learns Native dancing and culture from YouTube, since grandmother Opal declines to teach their heritage. Orvil feels like an imposter when he wears the regalia he found in her closet. Still, he participates in a storytelling project and busy his brother Lony a bike with the money. He scratches his leg and extracts three spider legs. Lony and Loother convince him to ask Opal about them, hoping she will not connect their interest in legends with the powwow.

The Interlude describes the diversity of powwow-goers. Neither last names nor the settler-imposed “Native blood quantum” defines identity. The narrator predicts violence that will, with a tragic irony, cause people struggling for recognition to “die in the grass wearing feathers” (141).

Calvin attends the powwow committee, where he meets Edwin and janitor Thomas Frank. At lunch hour, he tells a story for Dene’s project. He does not know his tribe, though both of his parents have some Native ancestry, and he worries that not-knowing is not enough of a story.

As they drive, Jacquie ignores Harvey’s story of drunken exploits, including a vision of “Tall Whites” in the desert. She receives a text from Opal, who admits that she and Orvil both found spider legs in their legs at the same age.

Part Three, “Return,” opens with Opal’s reflections on superstition. She knows Orvil dances, wearing the regalia given her by her friend Lucas. She and Jacquie had escaped Ronald when he crouched over the sleeping Jacquie one night. Opal hit him with a bat and the girls ran. They lost touch in the foster system, but Opal bonded with Lucas and later confirmed that Ronald lived.

Octavio’s father dies when a gang retaliates against his uncle Sixto and his older brother. His cousins Manny and Daniel eject their own father when they catch him beating their mother. Octavio’s grandma Josefina reveals that uncle Sixto has crashed the car and killed Octavio’s mother and brother. Octavio visits Sixto, who burns medicinal herbs. Octavio rejects the ritual and runs. When he develops a high fever, Fina believes him cursed. She tells him her story: when she was eighteen and pregnant her father cursed her. She got an abortion but never shook the curse. She wrestles a badger for some of its fur. She explains that his curse is his feeling that his identity is wrong; the cure is to be strong in himself, with the help of the badger.

After Manny’s death, Daniel continues to update his brother about their depressed mother and dire financial situation by email. He finds consolation in online coding communities. Octavio pays him for 3-D printed guns, and Daniel uses some of the money to buy a drone and VR goggles. He gives the rest to his mom for rent, and they cry and hug each other, apologizing.

Blue knows only her birth mother’s name: Jacquie Red Feather. She takes a job at her tribe in Oklahoma and soon marries Paul. He starts beating her, and she takes a job as powwow events coordinator in Oakland. Geraldine, with her brother Hector in the back seat, drives Blue to the bus station. Hector grabs the wheel and crashes the car. Blue realizes Hector has told Paul of her plans and hides in the station bathroom. When Paul enters, the woman in the next stall claims to be alone. Blue orders her ticket on her phone and the lady escorts her to their bus.

Thomas Frank was born to a white mother and an Indian father. Over time, his mother returns to evangelical Christianity and rejects his father’s beliefs as demonic. Thomas follows his father into alcoholism, always seeking a high he calls “the State,” when his feverish mind slows. He finds a different fulfilment in the drum group at the Indian Center, where he works. One day, when he is still drunk from the night before, Thomas tries to remove a live bat, but crushes it with his bare hands in front of the powwow committee. He loses his job, but his yearning to drum at the powwow trumps his embarrassment.

In Part Four, “Powwow,” Blue and Edwin set up the powwow and choose to keep the safe full of prize money with them. Orvil leaves his brothers in the stands and dresses for the Grand Entry dance. He releases his insecurity in the synchronicity. Dene builds his storytelling booth. Opal takes a place in the stands where the boys will not see her and sees a strange flying shape. Harvey and Jacquie sleep in separate rooms but meet for breakfast. The thieves pass successfully through the metal detectors and retrieve the bullets.

Edwin and Blue approach Harvey, who hugs Edwin and introduces them both to Jacquie Red Feather. Blue’s face goes white. Thomas drums the Grand Entry song, then goes to apologize to Blue but hears yelling. Loother and Lony get bored in the stands and move to the drummers, but they hear screaming. In his basement, Daniel pilots the drone and rejects his mother’s offer of a meal together: he does not want his guns used.

Dene’s booth stops a bullet but collapses. Orvil hears the shots and runs to protect his brothers, but he is shot. Calvin watches Tony renege on the plan. Octavio steals the money at gunpoint instead, but Carlos and Charles turn on him. A gunfight ensues, and Tony and the drone return to the fray. Calvin, Charles, Carlos, and Octavio are all shot.

Thomas dies of a neck wound, which feels like the State. Bill calls Karen to warn her away, then dies of a head wound. Opal, Jacquie, Harvey, Loother, and Lony drive Orvil to the hospital. Blue wrestles injured Edwin into her car. At the hospital, Harvey helps lift him out. Everyone sits in tense silence as Edwin and Orvil are treated. Opal believes Orvil will make it and counts the door swings—eight, her lucky number—before acknowledging the waiting doctor.

Tony falls on the field and hears Maxine singing a Cheyenne hymn. He is four, blowing dish soap bubbles at Maxine’s face. He plays with his Transformers: one of the good guys must die for them to win. Tony sinks and floats until the holes in him are birdsong.

Note: Throughout the guide, the term “Native” will be the default, since the characters Edwin and Orvil both discuss naming practices and choose “Native” as their academic and conceptual standard. “Indian” and other terms appear in both summaries and analyses where the characters or narrators use them.

There There from BookRags. (c)2022 BookRags, Inc. All rights reserved.