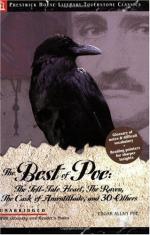 Introduction & Overview of The Raven

The Raven Summary & Study Guide includes comprehensive information and analysis to help you understand the book. This study guide contains the following sections:

"The .Raven" was first published in the New York Evening Mirror on January 29, 1845, and received popular and critical praise. Sources of 'The Raven" have been suggested, such as "Lady Geraldine's Courtship" by Elizabeth Barrett Browning, Barnaby Rudge by Charles Dickens, and two poems, "To Allegra Florence" and "Isadore" by Thomas Holly Chivers. Over the course of the nineteenth and twentieth centuries, "The Raven" has become one of America's most famous poems, partly as a result, of its easily remembered refrain, "Nevermore." The speaker, a man who pines for his deceased love, Lenore, has been visited by a talking bird who knows only the word, "Nevermore." The narrator feels so grieved over the loss of his love that he allows his imagination to transform the bird into a prophet bringing news that the lovers will "Nevermore" be reunited, not even in heaven. In "The Philosophy of Composition," Poe's own essay about "The Raven," he describes the poem as one that reveals the human penchant for "self-torture" as evidenced by the speaker's tendency to weigh himself down with grief.

In the essay Poe also discusses his method of composing "The Raven." He claims to have given much thought to his selection of the refrain, recognizing in it the "pivot upon which the whole structure might turn." His selection of the word "Nevermore" came after considering his need for a single, easily remembered word that would allow him to vary the meaning of the lines leading up to it. The poem uses this refrain, or variations of it, as the closing word for each stanza. The stanzas become increasingly dramatic as the speaker makes observations or asks questions that reveal his growing tension and diminishing reason. The narrator begins with innocent and amusing remarks that build in a steady crescendo to intense expressions of grief, all of which conclude with "Nevermore" or one of its variants.