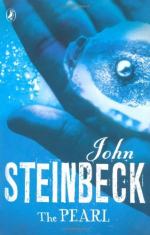 Kino's belief that evil is in the night is not unusual. But one of his many foibles is that he sees

The Doctor, the Priest, and the Pearl Buyer do their part to keep the peasants ignorant and docile. They use whatever methods the can to accomplish this—financial instability, religious ceremonies and threats of eternal damnation, or lack of economic choice. When the Pearl is discovered, however, each power controller makes the mistake of thinking he knows how to have his way with the finder. Due to this mistake, they do not allow any knowledge to escape but they alienate Kino from them. In other words, by insisting that he stay ignorant of their ways they harbor resentment and defiance. Kino is ignorant, not mentally deficient. They answer his reticence with force and are met with force.

The doctor uses an overbearing...