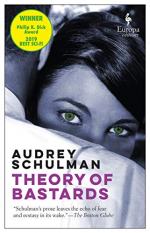 Frankie Burk, 33, is the main character and protagonist of Theory of Bastards. She is an evolutionary biologist and has won the prestigious MacArthur Award. She was born in Hamilton, Ontario, as Francine Burk, to parents who were religious and thought poor health came from mental weakness. When Frankie was in second grade, her family moved to Manhattan, and she had to adjust to the brusque manners of New Yorkers.

Frankie lived with endometriosis for many years before she was properly diagnosed. During that time, she experienced a great deal of pain and learned to lie to doctors to get what she needed. She also drove her friends away. As she withdrew into herself, she cut her hair short and started wearing childish stretchy outfits in bright colors, often with embroidered animals and sparkles.

As the novel begins, Frankie is recovering from a hysterectomy. She takes a new...