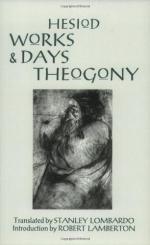 Theogony and Works and Days Topics for Discussion

Hesiod
This Study Guide consists of approximately 27 pages of chapter summaries, quotes, character analysis, themes, and more - everything you need to sharpen your knowledge of Theogony and Works and Days.

Compare and contrast the stories from each work about Zeus punishing mankind for accepting fire from Prometheus.

Compare and contrast Zeus and Cronos as a father and as a leader.

How is Zeus similar to the Christian God? How is he different?

What is the significance of Heracles slaying the monsters that Hera reared and then marrying her daughter?

Why does Hesiod tell Perses how to work?

What is wrong with idleness, according to Hesiod?

In Greek mythology in general, many things occur as an explanation for something that occurred in history. In "Theogony" in particular, several battles are described. What do the descriptions make the battles sounds like an explanation for?

More summaries and resources for teaching or studying Theogony and Works and Days.

Theogony and Works and Days from BookRags. (c)2021 BookRags, Inc. All rights reserved.