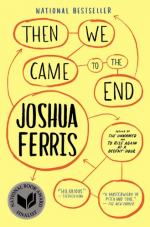 Then We Came to the End Summary & Study Guide

Joshua Ferris
This Study Guide consists of approximately 61 pages of chapter summaries, quotes, character analysis, themes, and more - everything you need to sharpen your knowledge of Then We Came to the End.

Then We Came to the End Summary & Study Guide Description

Then We Came to the End Summary & Study Guide includes comprehensive information and analysis to help you understand the book. This study guide contains the following sections:

This detailed literature summary also contains Quotes and a Free Quiz on Then We Came to the End by Joshua Ferris.

Then We Came to the End of It is a story about copywriters and art directors (creatives) working at a Chicago ad agency. It is the end of the dot com boom of the 1990s and the agency is suffering the loss of business. The 1990s created lots of new clients with big budgets and the creatives had been well compensated and lived very comfortable lives. Their comfort is not being shaken by a stream of creative department layoffs due to no new business. The stress of impending doom is coupled with the hours of boredom that must now be filled in order to look busy so as not to be the next one to get laid off. The story is primarily about the relationships that lie on top of the business decline. Days are filled with group meetings, both formal and impromptu, in which the creatives repeat gossip and tell stories to keep the days as animated as possible. The personal lives of the group members are complicated too by marital problems, affairs and cancer. The team is headed by a woman named Lynn Mason, a partner in the agency, who is formidable in spite of her diminutive size. Her right hand man, Joe Pope, is a bit of a loner but stands in for Lynn as the voice of reason in team meetings. Amber Lawton has had an affair with Larry Novotny who is afraid that Amber will not have an abortion and his marriage will end as a result of his indiscretion. As might be expected from creative types, some of the characters such as Tom Mota and Benny Shossburger have volatile personalities. After he is terminated, Tom returns one day dressed as a clown and shoots people with a paintball gun.

In addition to the stress of the decline in business, Lynn is diagnosed with breast cancer. Her on-again, off-again relationship with a man named Martin leaves her longing for love and satisfaction but that does not come because Martin is a workaholic and confirmed bachelor. Martin tells Lynn that they are not going to make it but he offers to stay with her through her cancer surgery and treatment. Lynn declines Martin's offer and throws herself into gaining new business for the firm.

By the end of the story it is 2005 and all the original creatives have either been laid off or left of their own accord but they reunite when a former copywriter, Hank, has published a book and they gather at one of his readings. They all catch up learning about each other's lives now and learn that Lynn had died in 2003 from ovarian cancer.

More summaries and resources for teaching or studying Then We Came to the End.

Then We Came to the End from BookRags. (c)2022 BookRags, Inc. All rights reserved.