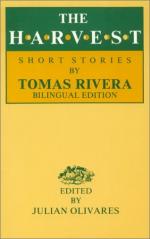 Books Like The Harvest by Tomás Rivera | Suggested Reading

Tomás Rivera
This Study Guide consists of approximately 30 pages of chapter summaries, quotes, character analysis, themes, and more - everything you need to sharpen your knowledge of The Harvest.

Rivera's highly influential ..y no se lo tragó la tierra/.. And the Earth Did Not Part (1971) is the story of the hardships endured by a Chicano migrant worker family and their community, as seen through the eyes of a young boy.

Pieces of the Heart: New Chicano Fiction (1993), edited by Gary Soto, is a collection of fifteen stories from some of the best-known Chicano writers. Writers represented include Sandra Cisneros, Alberto Alvaro Rios, Ana Castillo, Victor Martinez, and Helena Maria Viramontes.

Necessary Theater: Six Plays about the Chicano Experience (1989), edited by Jorge Huerta, is a collection of plays that examine the lives of Mexican Americans in diverse situations, from a World War II veteran returning to San Antonio (''Soldierboy") to Latina immigrants working as domestics in Beverly Hills (''Latina").

More summaries and resources for teaching or studying The Harvest.

The Harvest from Gale. ©2005-2006 Thomson Gale, a part of the Thomson Corporation. All rights reserved.