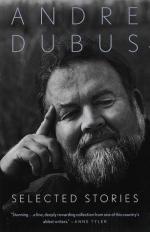 Books Like The Fat Girl by Andre Dubus | Suggested Reading

Andre Dubus's "A Father's Story" (1983) chronicles the story of a man who helps his daughter escape from the scene of a hit-and-run accident.

Dubus's work has often been compared to the stories of Raymond Carver, another realistic contemporary writer. In "Where I'm Calling From" (1981), Carver tells the story of a man searching for meaning in life.

"In the Garden of the North American Martyrs" (1981), by Tobias Wolff, depicts a professor's attempts to regain her identity and her independence.

Ernest Hemingway's "Hills Like White Elephants" (1927) is considered a classic short story. It focuses on the relationship of an American couple waiting for a train in Spain.

Life Size (1992), a novel by Jenefer Shute, narrates the story of a young woman who has been hospitalized for anorexia. The novel switches between the past and the present, detailing the woman's recovery while showing...