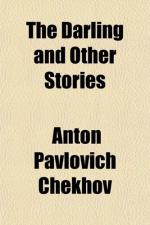 Anton Chekhov
This Study Guide consists of approximately 87 pages of chapter summaries, quotes, character analysis, themes, and more - everything you need to sharpen your knowledge of The Darling.

Chekhov's short story is in the style of realism, which predominated Russian literature throughout the latter half of the nineteenth century. Yet, while writers such as Tolstoy and Dostoyevsky wrote in a realistic style that conveyed a political message or moral philosophy, Chekhov's stories, as critics have pointed out, instruct the reader not so much in how to live but in how not to live. "The Darling" is realist in style partly in its portrayal of life in a provincial Russian village. Chekhov focuses on the mundane details of daily life as important indicators of character, giving the story a somewhat static tone, as nothing much "happens" in Olga's life, except a series of marriages and deaths.

Critics have often discussed the tone of the narrator in "The Darling" as an indicator of the author's perspective on the character of Olga. Chekhov's literary roots as a...

More summaries and resources for teaching or studying The Darling.

The Darling from Gale. ©2005-2006 Thomson Gale, a part of the Thomson Corporation. All rights reserved.