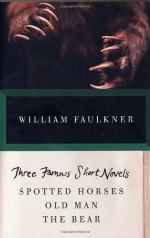 Get The Bear from Amazon.com
View the Study Pack
View the Lesson Plans
Study Guide
Order our The Bear Study Guide

William Faulkner
This Study Guide consists of approximately 52 pages of chapter summaries, quotes, character analysis, themes, and more - everything you need to sharpen your knowledge of The Bear.

While "The Bear" is a third-person narrative, it is told from the point of view of IkeMcCaslin. Yet not all that Ike knows is told. For example, neither Ike nor the narrator ever actually confirms that Boon killed Sam. McCaslin makes this assumption, and Ike, the only witness, lets his statement remain uncontested. Even more complicated are the conjectures of Ike and McCaslin about Eunice's suicide. It is here that the narrator is demonstrated to be not omniscient (all-knowing), but a more limited, and experimental, version of the traditional third-person narrator.

Set in Faulkner's fictitious Yoknapatawpha County, Mississippi, "The Bear" covers different time periods during Ike McCaslm's youth. Although the first section begins while Ike is age sixteen, most of the section covers Ike's first hunting trips during the fall of 1877 and the summer of 1878. The second section details events of 1879 (Lion's capture) and then...

More summaries and resources for teaching or studying The Bear.

The Bear from Gale. ©2005-2006 Thomson Gale, a part of the Thomson Corporation. All rights reserved.