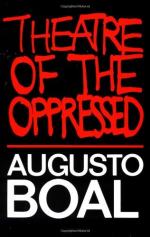 Augusto Boal
This Study Guide consists of approximately 27 pages of chapter summaries, quotes, character analysis, themes, and more - everything you need to sharpen your knowledge of Theatre of the Oppressed.

Theatre of the Oppressed Summary & Study Guide includes comprehensive information and analysis to help you understand the book. This study guide contains the following sections:

This detailed literature summary also contains Topics for Discussion on Theatre of the Oppressed by Augusto Boal.

In "Theater of the Oppressed", Augusto Boal argues that theater is inherently political and that traditional, Aristotelian theater is inherently oppressive. He reviews the history of theater, from Aristotle through Machiavelli, Hegel, and Brecht, and proposes a new idea of theater that breaks the bounds between audience and performers, and between chorus and protagonist.

In the first chapter, Boal presents Aristotle's philosophy and defines Aristotelian tragedy as a coercive system to enforce lawful behavior in the viewer, suppressing any desire for rebellion. According to Boal, Aristotle's tragic hero has one flaw, a characteristic that is antisocial or rebellious. The audience empathizes with this trait, and the virtuous character. When the flaw leads the character to tragedy, the audience pities the character and fears for themselves, who share this trait. Through the character's downfall, the trait is suppressed in the audience.

In the second chapter, Boal reviews the change in theater during the transition from the medieval, feudal period and the renaissance, with the rise of a bourgeois middle class. Boal states that the bourgeois rose up due to their individual prowess and practicality, leading to the rise of the exceptional individual protagonist in theater. Machiavelli's plays propound the value of intellect separated from morality, through which characters can achieve their aims.

In the third chapter, Boal compares Hegel and Brecht. Hegel creates an idealistic theater, where moral characters act according to their individual, free wills. The character is like the subject of a sentence, the acting force that creates action. In Brecht's Marxist theater, the social roles of characters are emphasized. Characters are acted on by society, which forces them into certain actions and behaviors. In Brecht's theater, the audience is called to action through an appeal to reason.

In the fourth chapter, Boal reviews his work in Peru with a literacy program. He outlines ways in which the people can become participants in the theater, instead of inactive spectators. People in the program use theater exercises as a means to discuss their lives and issues that they confront. The audience determines the outcome of the action, instead of the play being a static event that the audience merely watches and absorbs. Boal reviews different types of theater that can involve the audience actively in the ideas of the theater.

Finally, in the fifth chapter, Boal reviews his work in Brazil's Arena Theater and outlines his Joker system of theater. In the Joker system, a Joker character, who exists in the time and place of the audience, represents the author's point of view and presents the argument of the drama. The Joker leads the audience in an educational analysis of what is happening and calls the audience to action at the end of the play.

More summaries and resources for teaching or studying Theatre of the Oppressed.

Theatre of the Oppressed from BookRags. (c)2022 BookRags, Inc. All rights reserved.