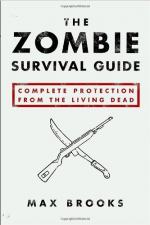 Max Brooks
This Study Guide consists of approximately 44 pages of chapter summaries, quotes, character analysis, themes, and more - everything you need to sharpen your knowledge of The Zombie Survival Guide.

This detailed literature summary also contains Topics for Discussion and a Free Quiz on The Zombie Survival Guide by Max Brooks.

The Zombie Survival Guide is not a traditional novel. Instead, it is written as if it were a non-fiction guide to identifying and surviving attacks by the living dead. In the mythology of Max Brook's fictional books, zombies are reanimated dead who have been killed and taken over by the Solanum virus. Zombie attacks are often suppressed by the government and the media, and average people must be prepared to fight to survive against these flesh-eating undead. The Zombie Survival Guide explains how.

"The Undead: Myths and Realities" explains that zombies are human bodies infected with the deadly Solanum virus. The virus kills the body and then takes it over, creating a new undead "brain" that drives the zombie to kill and eat humans, although it cannot digest them and needs no food. Zombies are slow and shambling but do not tire. The Solanum virus also protects the undead from decay for three to five years.

"Weapons and Combat Techniques" details the best methods and weapons for fighting the undead. Though close combat is discouraged, a crowbar, a small firearm, a trench spike and a Shaolin spade are the most useful weapons. The best anti-zombie combat technique is to keep your distance and make clean head shots with a silent projectile weapon to destroy the brain in one shot without attracting more zombies. Armor is a bad idea, since it slows your movement and causes noise.

"On the Defense" describes creating a defensive position. Having food, water, supplies, weapons and ammunition is important. The best positions are upper floors that zombies can't climb to, such as the second story of a house, upper floor apartments or offices, and an attack roof, if necessary. Block or destroy all stairs. In severe attacks, a self-sufficient fortress will be necessary, such as a military complex, prison or oil rig.

"On the Run" talks about traveling during a zombie attack. Traveling during the day is recommended, since zombies have an advantage at night. Travel light and be prepared physically, as well as have supplies. Prepare as much as possible. For land travel, a motorcycle is the best powered vehicle, but a bicycle is the best all-around choice. Traveling by air is relatively safe, except for refueling. Traveling by water is also a good choice, since zombies cannot swim and therefore sink to the bottom.

"On the Attack" explains how to hunt zombies safely, preferably by luring them to your position and picking them off. The most difficult zombie hunts are under water, requiring preparation and coordination. "Living in an Undead World" describes how to prepare an escape route in case of a zombie takeover and how to start over in an isolated location, away from all civilization.

"Recorded Attacks" describes zombie attacks dating from 60,000 B.C. to 2002 A.D., occurring in every part of the world. Many of the descriptions are vague or distorted, and many records of zombie outbreaks are lost or suppressed. The author suggests that, historically, zombie attacks are growing as the population grows and becomes urbanized and warns that world governments must acknowledge and address the problem of zombies. The end of the novel contains a journal for readers to use to track possible zombie activity in their area.

More summaries and resources for teaching or studying The Zombie Survival Guide.