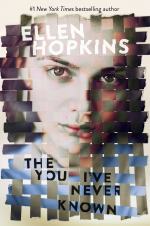 Ellen Hopkins
This Study Guide consists of approximately 46 pages of chapter summaries, quotes, character analysis, themes, and more - everything you need to sharpen your knowledge of The You I've Never Known.

The You I've Never Known Summary & Study Guide includes comprehensive information and analysis to help you understand the book. This study guide contains the following sections:

This detailed literature summary also contains Quotes and a Free Quiz on The You I've Never Known by Ellen Hopkins.

The You I’ve Never Known is a young adult novel by Ellen Hopkins. Told in verse, the story follows seventeen year-old Ariel Pearson as she explores her sexuality. Ariel learns that the nomadic life she has lived with her father has been an abusive existence based on lies. It is not the loving, caring relationship that her father claims. When the novel begins, Ariel and her dad, Mark, have come to live in Sonora, California. They have been there for over a year, which is the longest amount of time that they have ever stayed in one place. Ariel is tall, pretty, and loving. Her goal in life is to please her father, who is prone to drinking and rages. Ariel has traveled throughout the country with her father since she was a toddler. According to her father, her mother abandoned them both for a woman. Because of this, Ariel hates her mother and seeks to love her father despite his flaws.

In Sonora, Ariel is best friends with Syrah and Monica, the latter for whom Ariel has romantic feelings. Dad seems content to stay in Sonora because he has a job as an auto mechanic that he likes. He also has a steady girlfriend named Zelda. It is through Zelda that Ariel meets Zelda’s nephew, Gabe. Ariel and Gabe hit things off quickly, and Ariel begins to wonder if she is straight, gay, or bisexual. She becomes sexually involved with both Monica and Gabe, seeking to figure out just where she stands.

While on a drive, Gabe and Ariel come across the unconscious form of Ariel’s basketball teammate and friend from school, the wealthy Hillary Grantham, who has fallen while riding her horse. Gabe and Ariel stop and call for help. The paramedics arrive. They tell Gabe and Ariel that Hillary would have died without help. This begins a genuine friendship between Hillary and Ariel. It also earns the attention of Hillary’s father, Charles Grantham, who is running for State Attorney General. The media is alerted to what has happened, and news stations and papers carry the story. This enrages Ariel's dad, but Ariel cannot understand why.

Weeks later, after a basketball tournament, Ariel is confronted by two women. One of the women is tall and looks like Ariel. The other woman is shorter with spiky hair. They have found Ariel because of the press coverage. The woman explains she is Maya, Ariel’s mother. She also tells her that Ariel’s real name is Casey and Casey was kidnapped fifteen years ago. Finally, Ariel's dad's real name is Jason. Ariel is stunned. Her dad denies this at first. Later, he admits to parts of it being true. He curses out Ariel before they pack to leave town.

Ariel is shocked by all she has heard, but she agrees to meet with Maya again because she is determined to know the truth about everything. At the same time, Gabe begins dating Hillary, which leaves Ariel free to commit to Monica. Ariel realizes she must be brave and begin doing the right things in life.

Maya gifts Ariel with a journal recounting the events of the past fifteen years. The journal recounts that Maya married the much-older Jason to get away from her crazy, Scientology-obsessed mother and that Maya was in love with her best friend, a girl named Tati (whom she later married). The journal reveals that Jason became a controlling, alcoholic who was abusive. Things between Jason and her had become especially intense after 9/11, which was just before his military unit was set to deploy. When he discovered that Maya was going to move in with Tati while he was away, he picked Casey up from daycare. Then, he disappeared. For fifteen years, Maya and Tati tried to find Casey. Then, they learned about Hillary’s life being saved in the news. The journal ends with Maya’s declaration that she will find a way to get Casey back in her life.

More summaries and resources for teaching or studying The You I've Never Known.

The You I've Never Known from BookRags. (c)2022 BookRags, Inc. All rights reserved.