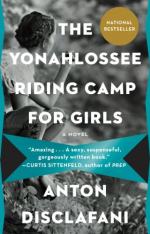 Anton DiSclafani
This Study Guide consists of approximately 75 pages of chapter summaries, quotes, character analysis, themes, and more - everything you need to sharpen your knowledge of The Yonahlossee Riding Camp For Girls.

This detailed literature summary also contains Quotes and a Free Quiz on The Yonahlossee Riding Camp For Girls by Anton DiSclafani.

It is 1930 when 15-year-old Thea Atwell is sent to the Yonahlossee Riding Camp for Girls. Thea has lived her entire life in the small town of Emathla, Florida with only her parents and twin brother Sam as company. Thea is resistant to the camp and wishes she didn’t have to leave her home. The reader learns that Thea was sent away for doing something “terrible” involving a boy.

Thea slowly begins to adapt to life at the camp. She lives in a cabin with five other girls. One of them, a popular and wealthy girl named Sissy, becomes Thea’s closest friend at the camp. Thea has spent her entire life riding a pony named Sasi, and continues riding every day at camp. The only other rider as skilled as Thea is Leona, a domineering and very wealthy girl.

Thea’s mother and father write her letters wishing her well and cursing the “terrible thing” Thea did to be sent away. Soon after Thea arrives, there is a school dance. Sissy begins a romance with a boy named Boone.

One afternoon, Thea goes riding in the pouring rain. A few days later, she is incredibly sick and confined to the infirmary. Mrs. Holmes, the headmistress, diagnoses her with homesickness, but Thea protests. Mr. Holmes, the headmaster, visits Thea in the infirmary and reveals that she won’t be leaving when the summer term is over. Thea realizes that her parents have sent her away for the full year instead of just the summer. She feels betrayed and resolves to make a better life for herself at Yonahlossee, without her family.

When Thea is well again, she asks Mr. Holmes if she can give his three young daughters riding lessons. Flashback scenes reveal the previous year, during which Thea begins growing closer to her cousin Georgie. There is a sexual undertone to their encounters and finally, around Christmas, they kiss. Their relationship continues and begins to create space between Thea and her twin brother Sam. Meanwhile, tensions grow between Thea and Georgie’s parents, as Thea’s Uncle George has lost his money to the Great Depression.

After Christmas, Mrs. Holmes is out of town for two months on a fundraising trip. Decca gets in a bad riding accident during Thea’s lesson. Thea is riddled with guilt, and goes to Masters one night to apologize to Mr. Holmes. She begins visiting Decca every day while she recovers from a broken collarbone. Thea begins developing feelings for Mr. Holmes and tries to see him more and more. They begin talking after Thea’s visits with Decca and one night Thea kisses him.

Girls begin leaving Yonahlossee because of the Depression. A rumor spreads that Leona’s family has lost everything, and this creates a sense of panic among the students. Thea receives a letter from her mother that says they are selling the house in Emathla and moving to a smaller home in Orlando. Thea is devastated, as she is deeply connected to her childhood home. Meanwhile, Thea continues developing her relationship with Mr. Holmes. They discuss their relationships with their respective families and Mr. Holmes helps Thea understand that parents are not always right in their actions. Thea begins focusing more on Mr. Holmes and less on her friends. It becomes so noticeable that a rumor begins spreading about her obsession with him.

In a flashback scene, Thea and Georgie have sex. Thea immediately regrets the act, as she has become increasingly unsure of her relationship with Georgie. The next day, Thea takes Sasi for a ride and runs into Sam and Georgie. Thea is clearly distressed in Georgie’s presence, and Sam violently attacks Georgie. They have a physical fight during which Sam loses control and causes Georgie severe head trauma. Thea and Georgie’s relationship is brought to light to everyone in the family.

In the present at Yonahlossee, Thea finally receives a letter from Sam. He sounds sad and exhausted. After reading the letter, Thea goes to see Mr. Holmes and they have sex in a clearing in the woods. Thea is in control of the experience and enjoys it. The following day is Yonahlossee annual Spring Show. Thea and Leona are neck-and-neck for first place. Thea does the final course in record-breaking speed and astonishes everyone. She wins first place. That night, there is a dance. Thea attends wearing an eye-catching green dress. She and Mr. Holmes have a final, brief confrontation about their relationship. Mrs. Holmes has returned from her fundraising trip.

That night, Sissy does not return to her cabin. Mary Abbott notices. Soon, a rumor is spreading about Sissy being seen in the woods with a boy. Everyone is certain she will be sent away if Mrs. Holmes finds out. Early one morning, Thea goes to Mrs. Holmes’s office and takes responsibility for Sissy’s actions, saying it was her in the woods and not Sissy. Mrs. Holmes sees through Thea’s lie, but maliciously chooses to let Thea accept the blame. Thea feels she is ready to see her family again, though, and accepts being expelled.

Thea takes the train to Florida, where her mother and father greet her. Her father has aged greatly and her mother is now plagued by migraines. Sam seems older, too, and is still feeling the emotional toll of his fight with Georgie. Thea is not home for very long before she realizes she wants to leave again. Her mother accepts this. Thea reveals that Georgie dies several years later and Sam never leaves Florida. Thea attends a boarding school in the Northeast and, in growing apart from her family, comes to understand more about the larger world.

More summaries and resources for teaching or studying The Yonahlossee Riding Camp For Girls.