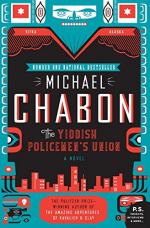 This detailed literature summary also contains Quotes and a Free Quiz on The Yiddish Policemen's Union by Michael Chabon.

The following version of this book was used to create this study guide: Chabon, Michael. The Yiddish Policemen’s Union. Harper Perennial, 2008.

The novel is set in an alternate history in the year 2007. In 1948, all Jews in and around Jerusalem were violently expelled and forced to make settlements in other parts of the world. One of those settlements, Sitka, was established in Alaska. In 2007, Detective Meyer Landsman of the Sitka Police Department begins to investigate the murder of an unidentified male victim found in the Hotel Zamenhof. However, he is ordered by his superiors to open no new cases in the weeks leading up to Reversion, which is the scheduled date for the dissolution of Sitka by the U.S. government, which had facilitated the original establishment of Sitka. Landsman and his partner Berko Shemets secretly investigate the case anyway. They find out that the murdered man was Mendel Shpilman, the estranged son of crime boss Heskel Shpilman. Many believed Mendel to possibly be the reincarnation of the Jewish messiah. They go to Verbov Island, which is the neighborhood in Sitka that is home to the Verbovers, member of a highly orthodox sect of Judaism. There, they interview Heskel Shpilman, who says that he has not seen his son in 23 years, although he refuses to say why.

Later, Landsman discovers the whereabouts of a suspect in a different case of his, and when he finds the suspect, the suspect begins to shoot at him. Landsman shoots back in self-defense, killing the man. Landsman’s badge is stripped from him pending investigation of the incident, but Landsman continues to investigate the murder of Mendel Shpilman. He interviews Mendel’s mother, Batsheva Shpilman, who says that Mendel ran away from home the day before his wedding. Just before running away, he confessed to his mother that he was homosexual. Sometime after running away, he became a heroin addict. Not long before he died, he called his mother and said that he would have to disappear for a while, implying that someone was pursuing him. While continuing the investigation, Landsman discovers that his sister, Naomi, had given Mendel a ride on her plane. Naomi was an airplane pilot and had supposedly died two years ago in a plane crash. However, Landsman discovers that the records of her final flights were altered.

Landsman then goes to Peril Strait, an area of wilderness over which Naomi had supposedly flown on her last flight, and there he discovers a fake drug treatment center run by Heskel Shpilman’s cronies. Landsman deduces that the center was used to lure Mendel out of hiding for some reason and that Heskel’s cronies had killed Naomi as a witness after she brought Mendel there. Landsman escapes from Heskel’s cronies and meets up with local law enforcement officers. The officers show Landsman a strange penned-in field nearby filled with cows. One of the cows is a red heifer. Landsman then visits Hertz Shemets, a former high-ranking police officer who is Landsman’s uncle and Berko’s father. Landsman tells Hertz everything he has found out. Hertz explains that the red heifer is likely part of a religious ritual meant to help the Jews reclaim the Holy Land and to bring about the coming of the Jewish messiah. Hertz says that the plan would require the demolition of the Dome of the Rock, which is a Muslim shrine built at the center of the Holy Land. The plan would also have necessitated Mendel Shpilman as the putative messiah. Hertz says that he is against the plan for various reasons.

Landsman approaches Bina Gelbfish—acting director of the Sitka Central Police Department and Landsman’s ex-wife—and tells her everything he has found out. Bina suspects that the U.S. government may be involved with the plot, and her suspicions are confirmed when the government tells her that the matter is not to be investigated further. Federal agents foil further investigations. The agents tell Landsman that the government is helping with the ritual because they believe that it will bring about the Christian messiah. The agents bribe and threaten Landsman not to tell anyone what he has found out. The plan proceeds and the Dome of the Rock is destroyed. Landsman then discovers that the person who killed Mendel Shpilman was Hertz Shemets. Hertz was attempting to foil the religious ritual by killing Mendel. Landsman then calls a reporter to hand over information, either regarding the religious ritual or Hertz’s murder of Mendel, or potentially both.