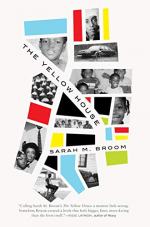 Sarah M. Broom
This Study Guide consists of approximately 50 pages of chapter summaries, quotes, character analysis, themes, and more - everything you need to sharpen your knowledge of The Yellow House.

In the prologue, Map, Sarah M. Broom writes about her childhood home, which she calls the Yellow House, which used to stand in New Orleans East before it was torn down. Movement I begins her family's story by writing about her grandmother Lolo and her mother Ivory's childhood. The family was not at all wealthy, but Lolo taught her children to always present themselves well and keep a tidy home. As African-Americans living in New Orleans in the mid-twentieth century, they often experienced segregation and racism. Ivory met her first husband Edward Webb when they were in high school. They married when she got pregnant and had three children before Webb was hit by a car and killed at just eighteen years old. Ivory soon got together with a divorced man, Simon Broom, who also had three children. They married and blended their families, also having several children of their own. Ivory bought and renovated the Yellow House in New Orleans East in the early 1960s. The family moved in in 1964 and survived the infamous Hurricane Betsy in 1965. By the 1970s, it became clear that New Orleans East was a neglected neighborhood and Sarah's elder siblings remember experiencing racism in school. Sarah, the youngest of Ivory and Simon's twelve children, was born in 1979.

Sarah's father Simon died of an aneurysm was she was just six months old; she writes about his funeral from the perspective of her siblings who remember it. Movement II focuses on her childhood, teenage years, and undergraduate days. Sarah had very bad eyesight which was not discovered for many years. Prescription glasses changed the way she saw the world literally and metaphorically. As a teenager, she went through phases of rebelliousness and religious fervor, but both phases ended. By then, her mother's shame about the Yellow House had grown, as their living conditions had greatly deteriorated. Sarah knew to never invite friends over. Sarah moved to Texas for college and returned home for visits. Her life and the lives of those around her changed: her nephew James (who was her same age) was arrested for armed robbery, and her close childhood friend Alvin was killed in a car crash. This was the last period of her life in which she slept in the Yellow House, which was the home her mother had hoped to leave as a legacy for her children.

Movement III is about Hurricane Katrina and its aftermath. Sarah was living in New York City at the time, but many of her family members, including her mother, had to evacuate before the storm. Her brothers Carl and Michael survived the hurricane in New Orleans and Sarah recounts the storm from their perspectives. Ivory's mother Lolo died one month after Katrina and the family reunited in New Orleans for the funeral. No one lived at the Yellow House now, which had been severely damaged and was eventually torn down by the city. Sarah felt the loss of the house and the displacement of her family very acutely. She returned to New Orleans to visit often before traveling abroad. She then decided to take a job working for a radio station in Burundi, hoping to better understand her family's displacement on a global scale by living and working there. Burundi was a dangerous place torn apart by civil war, and Sarah often felt depressed and lonely while there, despite the friendships she made. She decided to move back to New Orleans. She took a job as the mayor's speechwriter. From this position, Sarah saw how post-Katrina recovery efforts were failing. Her own mother was caught up in bureaucratic obstructions that illustrated the failure of various recovery programs. Sarah could not abide working for a government that was selling such failed attempts at reconstruction to its citizens, who were still lacking basic public services. She quit the city council job and left New Orleans.

Movement IV begins in 2011, six years after Katrina, when Sarah decided to try living in New Orleans full-time once again. She moved into an apartment in the French Quarter, where she could observe, contrast, and analyze the public face of the city shown to tourists with the reality of her childhood in New Orleans East and the current living conditions of those who still lived there, like her brother Carl. She began researching the history of New Orleans, her family, and her childhood neighborhood. Reconstruction of the city was still failing its residents, particularly those who were poorer or living in more disenfranchised areas of town. Carl took care of the landscaping at the Yellow House property, and he and Sarah spent time on their old street. In the final scene, Sarah cuts the grass on the property in the company of her brothers Carl and Michael, noting how they are all connected to that property.

In "After," Sarah writes that, eleven years after Katrina, Road Home finally settled with her mother Ivory. Ivory signed away her ownership to the property and was given a small grant. However, she cannot bring herself to spend the money despite her lifelong desire to own a home of her own and leave it as a legacy for her children. Sarah concludes: "The story of our house was the only thing left" (372).