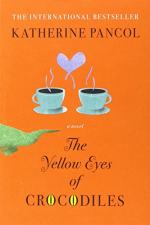 Katherine Pancol
This Study Guide consists of approximately 75 pages of chapter summaries, quotes, character analysis, themes, and more - everything you need to sharpen your knowledge of The Yellow Eyes of Crocodiles.

The Yellow Eyes of Crocodiles Summary & Study Guide includes comprehensive information and analysis to help you understand the book. This study guide contains the following sections:

This detailed literature summary also contains Quotes and a Free Quiz on The Yellow Eyes of Crocodiles by Katherine Pancol.

When Josephine Cortes discovers that her unemployed husband is having an affair, she gathers her courage and kicks him out. Amid worries about her family's future, she flat out refuses assistance from her cold hearted, money grubbing and wealthy mother and determines to make it on her own. Her meager earnings as a historical researcher are supplemented with translation work procured for her by her kind brother-in-law Philippe. Josephine's wealthy sister, Iris, on the other hand is bored with her life. Her daily existence of shopping and lunching with the elite wives of Paris has lost its charm and she is worried that her husband may also be having an affair. At a dinner party one evening, Iris spins a tale about her efforts to write a historical novel and peaks the interest of a prominent publisher. He presses her to produce, so Iris appeals to Josephine to ghost write the novel, offering her all the monetary gains in exchange for her own name on the cover. Desperate for money, Josephine agrees even though the deception concerns her.

Iris's concerns about her husband are unfounded, but he is having secret meetings with someone. Knowing that his wife has been harboring affection for her former lover, the famous film director Gabor Minar, he is working on a plan to end the emotional love triangle forever. Through an elaborate plan, Philippe arranges meetings and agreements so that Gabor and Iris meet at a public gala following the New York film festival. Iris is thrilled to be seeing her love and has fantasized that they will be together again one day. To her great shock, he greets her warmly and then introduces his wife. Iris is shaken to the core and devastated that her heart's desire is unavailable to her and she becomes withdrawn and miserable. Philippe is happy to finally be rid of the "ghost lover," and ready to move on with his own life.

Meanwhile, Atoine Cortes has finally decided to apply himself to something and runs off to Kenya with his mistress, Mylene, to raise crocodiles. The venture is filled with disappointments and frustrations. The farm's Chinese owner, Mr. Wei does not pay Antoine for months and the couple slowly eats through Mylene's life savings. Out of boredom, Mylene begins a cosmetics business, selling French-made goods to the Chinese women whose families work at the farms and eventually develops a partnership with Mr. Wei. Antoine continues to struggle however, finding it difficult to make payments on his business loan and missing his wife and daughters back in France.

Josephine keeps busy writing the novel and living off the book advance payment from the publisher. She creates a twelfth-century heroine who desires to live a simple life in humility and obedience to God, but is forced into marriage to a wealthy count. Her husband soon dies, living her a wealthy widow and at the mercy of lecherous men. Throughout the novel, Florine, as she is named, becomes a strong and independent woman, wealthy despite her desires, and a wife and widow several times. She finally finds happiness and true love in a final marriage to a simple man and the two spend her wealth helping others. Josephine works long hours at the library researching and writing and meets Luca, a handsome man who is also doing research there. The two have much in common, but Josephine feels insecure because she sees herself as unattractive. Josephine completes the novel in several months and the publisher is thrilled with the manuscript. Iris takes over the show and begins to market and sell the book using all her flair.

As Josephine works through her writing process she relies on the encouragement of Shirley, her friend and neighbor, who has secrets of her own. The English woman moved to France with her son Gary and refuses to tell Josephine about her family background or anything about her past. In time, Josephine's children and some other neighbors see photographs of Gary on the internet playing with the royal princes William and Harry when they were children. Josephine also sees Shirley standing in the shadows near Queen Elizabeth during a televised event at Buckingham Palace. Shirley continues to reveal nothing until one day when a stranger arrives on their doorstep and she decides to take action. After retiring to safety on the remote and private island of Mustique, Shirley tells Josephine that she is the illegitimate daughter of the Queen and that the strange man threatens to expose the truth to the world. She finally feels a sense of peace as she turns to British intelligence to keep their eye on the man rather than handle him on her own.

Elsewhere in the family, the sister's step-father, Marcel Grobz is having an affair of his own. For years, his wife, Henriette, has been cold in bed and had even outright refused him a child. He has found pleasure in the arms of one of his employees, Josiane Lambert, a woman who enjoys the benefits of a having a rich lover, but also truly loves Marcel. Marcel would like to divorce Henriette but she has the legal right to half of his fortune and is on the company's board as CEO. On her side, Henriette wants to ensure that her financial position is secured so she finds evidence that Marcel is indeed having an affair. But the joke is on her, since Marcel has planted the false evidence in order to throw her off the trail of the real situation. The only problem is that Josiane believes it to be true as well and leaves Marcel just as she discovers that she is pregnant with their child. Through a twist and turn of events, Josiane learns the truth; Marcel has planted false evidence and he has orchestrated a big business deal in which he is able to reorganize his company and write Henriette out of his business affairs and life for good. Josiane returns to Marcel and the happy couple joyfully welcome their newborn son. Henriette is left wondering what happened and how she lost it all, and almost dazed from the quick and calculating moves of her soon to be former husband.

As the novel draws to a conclusion, Josephine and Luca encounter difficulty in their relationship. Luca figures out the Josephine is the author of A Most Humble Queen and is angry that she does not appear to be who he thought she was. She is upset with him for ignoring her at a recent fashion show, where he was modeling on stage. Jo confesses to her agreement with Iris and Luca tells her about his twin brother, the model. The two are happy to have found each other and finally rest secured in each other's love.

Josephine plans to go back to working on her post-doctoral work and become a professor. However, Hortense has other plans for her mother. She learns that Josephine is the author or Iris's novel and wants her mother to receive not only the rights and money for the sales, but the credit as well. Despite her previous pronouncement of hatred toward her mother, Hortense is proud of her mother's hard work and care for the family. She realizes that her father did nothing to support them during the last several years and she wants to secure their future. She arranges an interview on national television and announces that Iris did not write the book. Although the news is sure to turn the sisters' worlds up-side-down, Josephine is glad that she will be able to continue to write under her own name.

Sadly, Antoine's ending is not so happy. Despondent over the failure of his business attempt and separation from the family he loved, he enters crocodile filled waters and meets his end. The glittering yellow eyes of the crocodiles that had once seemed to promise wealth and riches proved to be his undoing.

More summaries and resources for teaching or studying The Yellow Eyes of Crocodiles.

The Yellow Eyes of Crocodiles from BookRags. (c)2022 BookRags, Inc. All rights reserved.