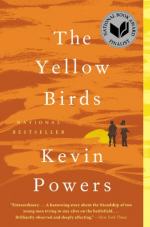 The Yellow Birds: A Novel Summary & Study Guide includes comprehensive information and analysis to help you understand the book. This study guide contains the following sections:

This detailed literature summary also contains Quotes and a Free Quiz on The Yellow Birds: A Novel by Kevin Powers.

The Yellow Birds by Kevin Powers is a tale of friendship, loss and redemption. Set against the Iraq War, events beyond their control or understanding forever intertwine three soldiers' lives.

Sergeant Sterling, a veteran of three tours of duty, tasks 21-year-old Private John Bartle with guiding 18-year-old Private Daniel Murphy, also known simply as 'Murph'. Reluctant at first to take responsibility for the younger man, Bartle soon comes to think of Murph as a close friend. Their experiences training for and then fighting in the war bond them in a way that nothing else could, but fate will step in to tear that bond apart.

The novel switches back and forth in time with each chapter, beginning with a battle in Al Tafar, Iraq, then flashing back to a base in New Jersey before settling on a back and forth between events in Iraq and Bartle’s post-war life in Virginia and then in Fort Knox, Kentucky. Having promised both Sterling and Murph’s mother that he would look out for Murph, Bartle becomes more and more disillusioned as he realizes that he is unable to keep that promise. He watches Murph become distant and Murph finally tells Bartle that he doesn’t want anyone to know he was in the war, nor does he want to continue with any relationships connected to it once he’s home.

Sterling tells Bartle that Murph’s attitude means he’s probably not going to make it out alive, but Bartle refuses to believe it, still thinking he can help his friend. In the end, Bartle can’t save Murph, who dies horribly after wandering away from the Army outpost where they’re stationed.

Bartle carries the guilt of his failure back home after his discharge. Confounding his guilt is the event that occurred after Murph’s death, a secret only he and Sterling share. Wishing to spare Murph’s mother from seeing Murph’s mangled, tortured body and wishing to save Murph from a final humiliation, the two men dump him into the Tigris River and claim they never found him.

Back home, Bartle does the best he can to drown his grief and deal with the memory of his actions by avoiding other people and drinking too much. In the end, he can’t keep running or hiding – literally or figuratively. The Army finds, arrests and convicts him to assuage Murph’s mother who has been hounding them for the truth about her son.

Sterling is unable to cope with the reality or consequences of what they did and as the event begins coming to light, he commits suicide – only after one last attempt to save Bartle by not telling the truth when investigators ask. It is Sterling’s one last act of protection for the men he led and cared for.

At the time he’s writing the story, Bartle is living in a cabin on a mountain, still solitary but beginning to heal.