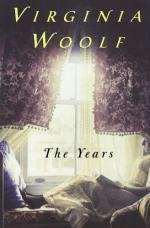 Get The Years from Amazon.com
View the Study Pack
Study Guide
Order our The Years Study Guide

Related Topics
A Room of One's Own
Between the Acts
Flush: A Biography
Jacob's Room
Kew Gardens

Virginia Woolf
This Study Guide consists of approximately 55 pages of chapter summaries, quotes, character analysis, themes, and more - everything you need to sharpen your knowledge of The Years.

The Years Summary & Study Guide includes comprehensive information and analysis to help you understand the book. This study guide contains the following sections:

This detailed literature summary also contains Quotes and a Free Quiz on The Years by Virginia Woolf.

The following version of this book was used to create the guide: Woolf, Virginia. The Years. Oxford University Press, 2009.

It is London in the 1880s, and Eleanor Partiger, a woman in her twenties, helps to take care of her large family whilst her mother lies in bed, terminally ill. Her father, Colonel Abel Partiger, is an ex-soldier and a proud Victorian gentleman, but he is too old-fashioned to be much help around the home. He is also having an affair with a working-class woman, and hides this part of his life from his family. Eleanor is therefore in charge of her many siblings: Morris, Delia, Milly, Martin, Edward, and Rose. They all live together in Abercorn Terrace, with their maid, Crosby.

In the years that follow the death of their mother, the Colonel becomes more and more dependent upon Eleanor, and she dedicates more and more of her time to her father, her family, and to charity work. The Colonel is close with his brother, Digby, who has two young daughters, Sara and Maggie. Eleanor is also friends with another cousin of hers, Kitty Lasswade, whom her younger brother Edward is in love with; Kitty is a glamorous socialite who marries a Lord for money and status. By 1908, the Colonel’s brother and his wife have both died, and their children are moved overseas; the Colonel grows increasingly frail, and Eleanor remains behind at Abercorn Terrace as the rest of the children grow up.

The main movements of the novel follow the Partiger children as they grow older. Sara and Maggie, the Partigers’ cousins, move back to Britain but are left in poverty due to the death of their parents. Maggie falls for a Frenchman named Réné and briefly lives with him in France, where they have children. Martin grows up to become a socialite like his cousin Kitty, though he is left cynical after losing the woman he loves. Kitty herself becomes tired of her life of parties, and starts to think of her cousin Edward; Edward has become a famous poet, thanks to his translations of Greek dramas. Rose, meanwhile, suffered a terrible trauma as a child which she carries into adulthood; she nevertheless joins the suffrage movement and protests violently for women’s rights, and is imprisoned. Morris becomes a successful lawyer and family-man, and the envy of Eleanor; he marries a woman named Celia and has three children: North, Peggy, and Charles.

It is around this time, in the 1910s, that the Colonel dies, and that Eleanor comes to take a long look at her life. She sells the family home and lives, briefly, in Spain, but she feels unrooted and without a purpose in life, now that her siblings are grown and her father and mother are gone. Approaching her fifties, she realizes with sorrow that she has given up her life for other people, and wonders if it is too late for her to find love.

The lives of the characters are interrupted in 1914 by the outbreak of the First World War. Maggie moves back to Britain from France with her husband, as it is no longer safe on the continent, and she and her sister Sara host a memorable dinner party for Eleanor, Réné, and their friend Nicholas. Sara is depressed because Morris’s son, North, has gone overseas to fight in the war. Morris’s other son, Charles, dies in combat. During the dinner party, an air-raid siren goes off, and they all take shelter in the cellar. Elsewhere in London, Rose is out of prison and earns a medal for her services to her country during the war. And the Partigers’ old maid, Crosby, has had to take up work with a family she dislikes, and her dog dies after it stopped eating its food out of depression. the narrative briefly follows Crosby as she hears the news that the war has ended.

Instead of heading home after the war, North takes up residence in Northern Africa and works on a farm for many years. He exchanges letters with Sara whilst he is there, and, when he returns in the early 1930s, he is in time for a family reunion party being thrown by Eleanor’s younger sister, Delia. Eleanor herself is now in her seventies, and she is still alone. At the party all of the characters slowly interact and exchange gossip, with Martin teasing his sister Rose for her political activism, Kitty expressing boredom at her life, and Sara dancing wildly with Nicholas. North meets a beautiful young woman and gets her telephone number, and Edward, now an ageing poet, seems contented with his lonely life. Eleanor grows increasingly tired at the party, and loses focus on the conversation and events around her as she slips into doubts about how she has lived her life, and questions the purpose and meaning behind her own existence.

As the party winds down, the children of the caretaker of Delia’s home enter and eat cake; the adults ask them for a song but are shocked, and slightly disturbed, when the children sing a nonsense rhyme in shrill voices. As the children leave, the sun rises and the party is over. Sara had fallen asleep, and Maggie wakes her, just in time to see the older generation of Partiger siblings all together, silhouetted by the dawn light in the window. The stand still for a moment, before leaving the party and going their separate ways.

More summaries and resources for teaching or studying The Years.

The Years from BookRags. (c)2022 BookRags, Inc. All rights reserved.