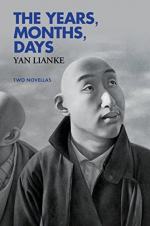 Yan Lianke
This Study Guide consists of approximately 45 pages of chapter summaries, quotes, character analysis, themes, and more - everything you need to sharpen your knowledge of The Years, Months, Days.

This detailed literature summary also contains Quotes and a Free Quiz on The Years, Months, Days by Yan Lianke.

In "The Years, Months, Days," a devastating drought envelopes the country, causing those in rural villages to flee to the East in search of a place with food and water. The Elder, who told the villagers to flee to the east, decides to stay behind, telling the others that he is too old to make the journey and he would surely die. The Elder resolves to grow one stalk of corn so that the villagers will have an ear of corn to grow other corn plants from when they return to the village. He and his dog named Blindy water the corn stalk every day with their urine and watch over it. The pair build a shelter to protect the stalk from the sun and the wind, nurturing it until it grows taller than the Elder.

While the pair take care of the cornstalk, their supply of food and water diminish until there is nothing left. The rats have all left the land and the villagers did not leave any food in the village. The Elder travels far to find food and water, only to be accosted by a band of wolves, whom he outsmarts. Upon returning to Blindy and the corn stalk, the Elder makes the dog promise to bury him next to the corn stalk if he dies so that the stalk may live. The Elder lays down in the grave he has dug near the roots of the stalk and falls asleep.

Winter and another summer passes before the rain returns and an autumn sowing season begins in the mountains. The villagers return and find the cornstalk in great health and a huge ear of corn growing from it. They also discover the corpse of the dog and the Elder. The roots of the stalk are intertwined with his bones, leading the villagers to bury him and the dog together. Eventually the villagers are not able to find any other corn seeds to grow and many have to leave the mountains in search of more food. However, seven young men stay behind to plant the seven corn seeds that were recovered from the Elder's corn stalk so that the villagers will have food when they return.

"Marrow" tells the story of Fourth Wife You and her four idiot children. She has successfully married off her two eldest daughters but her Third Daughter and son, Fourth Idiot, still live with her. Fourth Wife You still sees the ghost of her husband, Stone You, and berates him when he gives her advice. He committed suicide when he discovers that all of his children are mentally challenged because of his family blood line.

Fourth Idiot is obsessed with his sister and constantly sexually harasses her. Their mother is worried because of Fourth Idiot's behavior and locks him in his room away from his sister. When Third Daughter requests that she be married as well, Fourth Wife You promises her daughter that she will find her a husband who is a "wholer."

The husband of Third Daughter steals all of Fourth Wife You's food while she visits Second Daughter. That night, Fourth Wife You cooks salty buns and feeds them to Fourth Idiot. She tells Fourth Idiot to take two cloth bags filled with Stone You's bones to his other two sisters the next day. She makes him promise then makes sure there is no water left in the house when he falls asleep. That night, Fourth Idiot wakes up and is terribly thirsty. He does not find any water in the house but he does find a bowl of red soup by his mother's bedside. He drinks it and in the morning he takes the two bundles to his sisters. Half a month later, Fourth Wife You's children bury her next to Stone You. While they cry for her, her ghosts whispers to them that the illness is hereditary and questions them if they all know how to treat it now.

More summaries and resources for teaching or studying The Years, Months, Days.