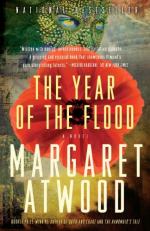 Plot Summary
+Chapters Summary and Analysis
The Garden
The Year of the Flood
Creation Day
The Feast of Adam and All Primates
Festival of Arks
Saint Euell of the Wild Foods
Mole Day
April Fish
The Feast of Serpent Wisdom
Pollination Day
Saint Dian, Martyr
Predator Day
Saint Rachel and All Birds
Saint Terry and All Wayfarers
Saint Julian and All Souls
Free Quiz
Characters
Symbols and Symbolism
Settings
Themes and Motifs
Styles
Quotes
Order our The Year of the Flood Study Guide

The Year of the Flood Summary & Study Guide

Margaret Atwood
This Study Guide consists of approximately 115 pages of chapter summaries, quotes, character analysis, themes, and more - everything you need to sharpen your knowledge of The Year of the Flood.

The Year of the Flood Summary & Study Guide Description

The Year of the Flood Summary & Study Guide includes comprehensive information and analysis to help you understand the book. This study guide contains the following sections:

This detailed literature summary also contains Quotes and a Free Quiz on The Year of the Flood by Margaret Atwood.

The following version of this book was used to create this guide: Atwood, Margaret. The Year of the Flood. New York: Doubleday, 2009. EBook.

The novel has two main third person narrators: Toby and Ren. Both women were once God’s Gardeners and moved on to dwell in the Exfernal world. The novel opens just after the Waterless Flood has killed most of mankind. Toby is holed up in the AnooYoo Spa-In-The-Park and Ren is trapped in the Sticky Zone at Scales and Tails. Amanda and Ren’s stories are told in the present with flashbacks to the past. This tale is broken into sections introduced by speeches from Adam One about various Saint days, which include updates about the state of the God’s Gardener cult as the years pass.

The novel opens with a poem about the Biblical fall of man and how nature will one day rise up to create a new Eden. The reader then moves to Toby as she takes stock of the spa after the Flood. Left alone Toby remembers the past. Her parents were middle class. Her mother ran a HealthWyzer chain and her father installed air conditioners. Then they refused to sell to a developer and her mother contracted a mysterious illness. As the money ran out Toby was forced to quit college. Her father killed himself with his illegal rifle after her mother’s funeral used the last of the money. Toby buried her father and the gun in the backyard and walked away.

Toby could not get a good job because she had no identity, so she ended up in a plebe working as a Furzooter. After being assaulted a couple times Toby managed to get a position at Secret burgers. The restaurant was managed by Blanco a bully who viewed the girls as sexual toys. After killing his latest one when she tried to flee he turned to Toby. Toby was rescued by the God’s Gardeners before Blanco managed to kill her as well but during the rescue managed to make Blanco an enemy for life.

Toby then went the live at the Edencliff rooftop Garden where she reconnected with her friend Rebecca who had sent the Gardeners to rescue her. Though she did not believe in the Gardeners faith, Toby was willing to do any work for them because they saved her life. Pilar, known as Eve six, took Toby under her wing and taught her about bees and mushrooms. She also drew on her aborted college career to start teaching potions and lotions to the kids.

When Pilar contracted stomach cancer and died Toby took over as Eve six. She then learned that the Gardeners were where those hiding from the corps ended up. Many of the founding members were doctors and scientists. The Gardeners continued to help people escape the corps and they gathered intelligence.

Unfortunately, Toby was forced to leave the Gardeners when Blanco attacked them. Though Zeb, an Adam, provoked the attack Toby was still in danger. She is given a new identity and a job managing AnooYoo Spa-In-The-Park. While there she helps out Ren by giving her a job and is shown the MaddAddam site by Zeb. The site allows her to keep track of the Gardeners activities.

Ren came to the Gardeners as a child when her mother Lucerne fled the HealthWyzer compound to be with Zeb. At first, she found their handmade clothing, vegetarian diet, and habit of gleaning strange and the other kids teased her. Then she made friends as Bernice stood up for her and settled in.

Ren met Amanda when she and Bernice had a fight when they were out gleaning Vinegar one day. Amanda was in the mallway with other Tex-Mex girls. Ren invited her home and Amanda ended up joining the Gardeners and living with Ren.

With the arrival of Amanda Ren lost her friendship with Bernice. She ends up telling Bernice the gossip that Bernice’s father, Burt, is sleeping with Nuala. The next day Bernice and her mother, Veena, turn Burt into CorpSeCorp for his Gro-op. Years later Ren learns that Burt was molesting Bernice and her actions had little to do with Ren’s tale.

At the time, however, Ren is devastated and Amanda tries to cheer her up by arranging for her to smoke weed. This only makes her sick. Soon after this incident, Lucerne and Zeb’s relationship breaks down and Lucerne returns to HealthWyzer with Ren. Lucerne claims that she and Ren were kidnapped and paints Zeb as a sex-crazed lunatic. She ensures Ren’s compliance by threatening Amanda.

Ren gets sent to high school where she meets and falls in love with Jimmy. Sadly, he does not feel the same way and ends up breaking her heart. After this Ren falls into a deep depression and her grades slip dooming her to Martha Graham. Since that is where Jimmy went Ren has plans of a loving reunion but knows that such a thing is fantasy.

Ren does see Jimmy at Martha Graham but he pretends not to see her. She also runs into Bernice who is now a protester with an extreme green group. This is when Ren learns that Bernice was molested by Burt. After this revelation, she never sees Bernice again and only learns of her death in a safe house raid through news coverage of the event.

Soon after meeting Bernice Ren is forced to drop out of school because her father is killed and her mother remarries. Her stepfather has no interest in a stepdaughter so Lucerne sends Ren away. Ren gets a job working for Toby at AnooYoo Spa. She is happy for a time but after learning that Amanda is now dating Jimmy and running into Lucerne at the Spa she needs to escape. She takes a job working at Scales and Tails as a dancer.

Back in the present, Amanda finds Ren and they manage to figure out the door code to get Ren out of the Sticky Zone. They then reunite with Shackie, Croze, and Oates, boys they knew as kids from the Gardeners. After the reunion, they are forced to flee Scales and Tails as the boys are pursued by Painballers. On their way to AnooYoo Spa for supplies and to look for Toby, Ren and Amanda are captured by the Painballers.

Toby manages to wound one of the Painballers as the group passes the spa, and she rescues Ren. Unfortunately, the Painballers escape with Amanda. Toby patches Ren up and the women leave the spa in pursuit of the Painballers. They find Oates' body in the woods and then run into Croze acting as a shepherd. This causes them to team up with MaddAddam where they find Shackie, Rebecca, and Zeb.

Zeb refuses to help them search for Amanda, as he sees finding Adam One as a higher priority. He does offer a map and supplies when the women decide to go after Amanda by themselves. Toby and Ren meet the Crakers who show them where the Painballers have gone. They manage to rescue Amanda and meet up with Jimmy. The novel ends as they sit around the fire listening to the Crakers coming.

More summaries and resources for teaching or studying The Year of the Flood.

The Year of the Flood from BookRags. (c)2022 BookRags, Inc. All rights reserved.