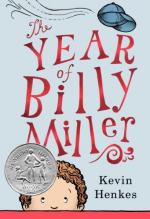 Kevin Henkes
This Study Guide consists of approximately 33 pages of chapter summaries, quotes, character analysis, themes, and more - everything you need to sharpen your knowledge of The Year of Billy Miller.

The Year of Billy Miller Summary & Study Guide includes comprehensive information and analysis to help you understand the book. This study guide contains the following sections:

This detailed literature summary also contains Quotes and a Free Quiz on The Year of Billy Miller by Kevin Henkes.

“The Year of Billy Miller” is a children’s novel by Kevin Henkes which follows the life of 7-year-old Billy Miller through his second-grade year at Georgia O’Keefe Elementary School in Constant, Wisconsin. When the novel begins, Billy is worried that he will not be smart enough for second grade, because at the end of the summer, on a road trip, he fell from an observation platform and hit his head, leaving a large lump, which ultimately goes away. Billy’s father, Papa, tells Billy that he will be fine, and drawing on a summer letter from the woman who will become Billy’s second grade teacher, Mrs. Silver, in which she mentions the Chinese Year of the Rabbit, Papa explains that this year will actually be the Year of Billy Miller.

The Year of Biller Miller turns out to be exceptional for being relatively unexceptional, though deeply touching. Billy must contend with a bossy girl at school, Emma Sparks, and must handle his annoying sister, Sal, at home. He must convince Mrs. Silver that he is a nice boy, for he worries that she thinks he is mean, and must write a poem about, and in dedication to, his mother, at the end of the school year. Billy plans to stay up all night at one point, but fails to do so, and only scares himself after letting his imagination run wild. At one point, Papa and Billy must salvage Billy’s bat cave diorama after Sal unthinkingly adds glitter to it.

Yet, through it all, Billy manages to grow and learn from those around him, and to influence them as well. By the end of the novel, Billy has become more appreciative of his sister, even giving her his approval by writing that she is “okay”. Billy inspires Papa to begin a new form of art, which proves to be his breakthrough. Mama, in turn, inspires Billy to understand the world in a different way through appreciation for quietness in the world. Billy even comes to figure out how to deal with Emma, and that is to simply ignore her. In the end, what makes the Year of Billy Miller so exceptional is that it is unexceptional, except to Billy, whose life seems better and fuller in the end.

More summaries and resources for teaching or studying The Year of Billy Miller.

The Year of Billy Miller from BookRags. (c)2022 BookRags, Inc. All rights reserved.