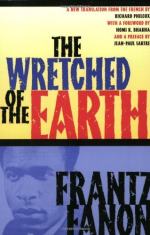 The Wretched of the Earth Summary & Study Guide

Frantz Fanon
This Study Guide consists of approximately 34 pages of chapter summaries, quotes, character analysis, themes, and more - everything you need to sharpen your knowledge of The Wretched of the Earth.

The Wretched of the Earth Summary & Study Guide Description

The Wretched of the Earth Summary & Study Guide includes comprehensive information and analysis to help you understand the book. This study guide contains the following sections:

This detailed literature summary also contains Topics for Discussion and a Free Quiz on The Wretched of the Earth by Frantz Fanon.

In a way unlike other cries for black liberation from the 1960s such as Soul on Ice by Eldridge Cleaver, the Autobiography of Malcolm X and The Fire Next Time by James Baldwin, The Wretched of the Earth presents a durable intellectual framework based on medical as well as sociological evidence, for the abolition of colonial (white) rule. The book lays out a clear blueprint for revolution and considers all of its potential consequences, for rebel and colonialist alike.

Born in the Caribbean island nation of Martinique, Frantz Fanon was a French-educated black psychiatrist who was placed as a staff physician in a hospital in the French colony of Algeria in Northern Africa in the 1950s. When he understood that most of the mental illness he treated there resulted in some manner from the oppression of colonialism, his political awakening led his sympathies to the rebels. His first book, Black Skin, White Masks, was published when he was twenty-seven and describes his experiences as a black psychiatrist in the Caribbean.

In a lengthy preface, the French existentialist philosopher/writer Jean-Paul Sartre admonishes Europeans and whites in general to read Dr. Fanon's book closely and heed its message. In chillingly premonitory language from 1961, Sartre describes the dawn of a new age: "Europeans, you must open this book and enter into it. After a few steps in the darkness you will see strangers gathered around a fire; come close and listen, for they are talking of the destiny they will mete out to your trading centers and to the hired soldiers who defend them."

Sartre elaborates that any attempt to domesticate a member of one's own species is futile since it only reduces the efficiency of the person enslaved, either legally or economically, until it costs the colonialist more to keep that person in bondage than to find some other way to get the work done. Echoing William Faulkner who wrote that slavery makes beasts of the men who enslave, Sartre says the economic slavery of colonialism makes its subjects stronger men than their overlords.

Fanon's understanding of the dynamics of colonialism as well as of revolt are presented in this book is in specific relationship to the Algerian struggle to throw off the shackles of French colonial rule. But the lessons learned, tactics used, and sequelae of a rebellion were quickly adapted and assimilated by American blacks in their struggles for civil, political, and economic justice of the 1960s. In that sense, The Wretched of the Earth is not only an interesting piece of contemporary history, but also a living political manifesto that can find application in any number of exploitative situations.

Frankly Marxist in places, the work is finally a synthesis of many lines of thought that also include socialism and democracy. It is Frantz Fanon's distillation of the political truths that he knows, written in earnest and with a sense of urgency that sounds fresh today.

The Wretched of the Earth from BookRags. (c)2022 BookRags, Inc. All rights reserved.