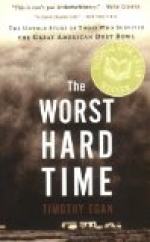 “The Worst Hard Time – The Untold Story of Those Who Survived the Great American Dust Bowl,” by Timothy Eagan is the story of the people of the Dust Bowl. Although it has facts and figures as to how many tons of silt, grit and dirt the “black blizzards” dropped in the area, “The Worst Hard Time” tells the story of the citizens of the area and their struggle to fight a vicious mutated nature that man helped create or to give up on the land and leave. Each man and woman faced the challenge of a lifetime – challenges that they would have never imagined or taken on if their backs hadn’t been against the wall.

Much of the region of the High Plains that would one day be tagged with the pejorative, “The Dust Bowl” was grassland. It was where the Indians rode their ponies and hunted bison. The grass was rich and thick and was the main food source of these giant buffaloes. Bluestem grass was short and dense and kept the earth in place even during times of drought, which was not an unusual event in this region. During a drought, summer temperatures could reach 120 degrees. The grassland had been nature’s gift to the Indians and bison and later to the cowboys who worked the grand cattle ranches of the Texas Panhandle.

When the drought of the early 1930s struck the area, a phenomenon known as a dust storm began to become a frequent event. The early dust storms were more annoying than threatening. But the money men behind the XIT Ranch – the biggest cattle ranch in the world – saw the drought as a threat to their profits and decided to sell off their vast acreage in small parcels.

Not big enough for a ranch, these small parcels were perfect for crop farmers. But the grassland had never been farmland, and plowing up the thick grass exposed the earth to the drought, heat and - worst of all - the wind. Although there were other contributing factors, the thousands of farmers who were encouraged to come to the area and make a killing in wheat production was one of the main causes of the top soil erosion that led to the creation of the Dust Bowl – a region that was not good for farmer or cowpoke.

The story, based on true events, allows the denizens of the Dust Bowl to tell their own stories. Each story is unique – why some stayed in the face of such impossible conditions and why some chose to abandon the land that they once loved and that once held such promise.