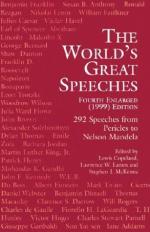 This detailed literature summary also contains Topics for Discussion and a Free Quiz on The World's Great Speeches by Lewis Copeland.

The book is presented as a series of speeches, ranging from Ancient Greece to the 1990s. These speeches include such famous orators as Pericles and Mark Antony, though the latter is actually the speech written by Shakespeare for his play, "Julius Caesar." These earliest offerings cover several topics but many focus on the deaths of soldiers or important people. As the geographic locations of the orators change to Europe, the topics change only slightly. Martin Luther addresses his judges regarding the charge that he has betrayed the Catholic Church with his teachings. Those teachings become the basis for the Protestant movement and Luther, probably knowing that he is facing a death sentence, stands by his words. John Calvin also speaks of religious ideals before the topic moves back to war with Napoleon.

Following those speakers, orators from a period of the American Revolution are presented. There are speeches calling for patriotism and others reminding of the cost of freedom. Benjamin Franklin points out that he has some problems with the Constitution as presented, but says that everyone can find something in that document with which to disagree.

The speeches that follow address global concerns of the recovery from what would become known as World War I and the impending fear of World War II. The speeches include the fear that war is unavoidable and the necessity for careful evaluation of the situation. The orators' words then turn to the need for a lasting global peace and ways to accomplish that, with several indicating the need to spread democracy in order to achieve and retain that sought-for peace. For balance, there are speeches from Adolf Hitler and Mussolini, touting their objectives and calling their followers to fight for the ideals expressed by these men.

The book then moves to speeches from the 1960s. With the conflict in Vietnam as the backdrop, many of the speakers are again searching for world peace. The ongoing problems facing the world, including the buildup of nuclear arms, prompts new calls for changes. John F. Kennedy, during his inaugural address as President of the United States, calls his election a celebration for freedom rather than a victory for a political party.

The book concludes with famous black orators and speeches from the period 1974-1997. The speakers cover a range of black activists, many presenting their thoughts on how to achieve better race relations. The final section, 1974-1997, includes the inaugural address of Ronald Reagan who says that Americans take the nonviolent change of command for granted and cites wars that erupt over political power in other countries.