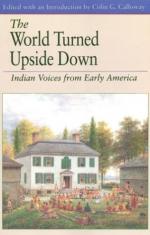 This detailed literature summary also contains Topics for Discussion and a Free Quiz on The World Turned Upside Down: Indian Voices from Early America by Colin G. Calloway.

The World Turned Upside Down contains several texts written by Native Americans, from the time Europeans made first contact with the New World, up until the end of the American Revolution. By creating the volume, the editor Colin G. Calloway makes an effort to give a voice to the indigenous people who were too often marginalized, abused, and exploited by the arrival of land-hungry Europeans.

European contact changed Indian peoples in numerous ways, literally turning their world upside down. European epidemics decimated Indian populations, with many tribes being wiped out entirely. Zealous Christian missionaries caused many Indians to adopt different spiritual beliefs. Europeans also brought alcohol, and alcoholism had a deleterious effect on Indian communities. Europeans were ever-hungry for land, causing no end to conflict and tension. Indians had only a communal sense of property, making "land deals" a confusing notion. Furthermore, Indians depended much more on the spoken word, and had little use for or understanding of treaties and deeds, which the Europeans depended upon. Therefore, through trickery, bribes, coercion, misunderstanding, or valid deals, Indians were pushed ever westward as European colonies grew.

Europeans generally regarded Indian peoples as savage, amoral, paganistic, and simplistic, which helped them to justify massive land seizures. But in truth, Indians simply had different customs, cultures, and values than Europeans. Many texts show that Indians were often orators of great skill, using all the sophisticated tools of metaphors, humor, sarcasm, irony that we would expect from master orators.

Texts in the volume show that Indians were not uniform in their reaction to European encroachment. Some, like Indian minister Samson Occom, embraced Christianity and tried to spread European values to Indian communities. Others expressed indignation and anger, trying to remind Europeans that Indians were in fact essential to European survival on the continent in their early decades. Others attempted to reject European culture entirely, due to its obsession with material wealth and other perceived shortcomings, and make war. Even a few Europeans, such as Mary Jemison who was kidnapped by the Seneca Indians as a teenager, embraced Indian culture and lived her life as a member of the Indian community.

In the end, the editor urges the reader to take away a more nuanced view of Indian peoples. They were not the monosyllabic and half-naked primitives depicted in early Hollywood films or mainstream history books. They were a sophisticated people with their own civilization who tried to resist or otherwise respond to the European invasion of North America with various strategies.