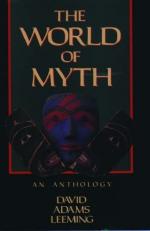 David Adams Leeming
This Study Guide consists of approximately 27 pages of chapter summaries, quotes, character analysis, themes, and more - everything you need to sharpen your knowledge of The World of Myth.

The World of Myth Summary & Study Guide includes comprehensive information and analysis to help you understand the book. This study guide contains the following sections:

This detailed literature summary also contains Topics for Discussion and a Free Quiz on The World of Myth by David Adams Leeming.

"The World of Myth: An Anthology" by David Adams Leeming is a nonfiction work that explores and defines a series of ancient mythologies. Leeming is an author of world renown with a large body of work to his credit, much of which focuses on specific aspects of mythology, including its origins, plausibility, tradition, cultural influence, and how the myths create, support, and reinvent themselves over the course of centuries all over the world.

While the world of mythology is complex, Leeming manages to create a type of primer, introducing the reader to various myths while successfully interjecting enough explanation, theory and fact that the text will be enjoyable for the reader who already may know a fair bit about ancient myths.

Leeming is fond of separating out the myths and showing the reader how some of the elements may have come about, what they represent, and how they have been recycled throughout various cultures over the periods of hundreds of years, and even millennia.

The oldest written myth was found in Egypt circa 3000-2200 B.C.E. The tale, referred to as the Pyramid Texts, was recorded in hieroglyphics on the Old Kingdom's inner chamber walls. The next Egyptian myth, titled the Coffin Texts of the Middle Kingdom, originated around 2134-1660 B.C.E. Then came one of the most famous Egyptian myths found in "The Book of Going Forth by Day," also called "The Book of the Dead," which was recorded during the New Kingdom around 1550 B.C.E.

Another ancient myth was found in Mesopotamia. The Enuma elish, celebration of the high god Marduk, is thought to have been composed around the time of the reign of Nebuchadnezzar in the 12th century B.C.E.

The Hebrew version of Genesis was composed around the time of the Babylonian captivity during the sixth and fifth centuries B.C.E. The Greek myths were first recorded by Hesiod, a scholar who lived in the eighth century B.C.E.

Leeming does not waste time giving unnecessary details about the myths, rather the author just covers the very basic concepts before moving on to compare and contrast the myths. There is a great deal of symbolism in myths, a topic which Leeming explores.

Each section of the book is devoted to a specific topic and lists the myths that correspond to the subject, along with basic information, meaning, use of metaphors, and how the myth may have been recycled and integrated into other cultures. While most recycled myths remain almost identical except for changes in the names of the characters and locations, there are some that differ.

Some of the topics in "The World of Myth" include: "The Creation," "The Flood," "The Afterlife," "The Apocalypse," "The Pantheons," "Gods, Goddesses and Lesser Spirits," "Hero Myths," and "Place and Object Myths."

More summaries and resources for teaching or studying The World of Myth.

The World of Myth from BookRags. (c)2022 BookRags, Inc. All rights reserved.