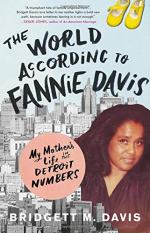 The World According to Fannie Davis Summary & Study Guide

Bridgett M. Davis
This Study Guide consists of approximately 54 pages of chapter summaries, quotes, character analysis, themes, and more - everything you need to sharpen your knowledge of The World According to Fannie Davis.

The World According to Fannie Davis Summary & Study Guide Description

The World According to Fannie Davis Summary & Study Guide includes comprehensive information and analysis to help you understand the book. This study guide contains the following sections:

This detailed literature summary also contains Topics for Discussion on The World According to Fannie Davis by Bridgett M. Davis.

The following version of the book was used to create this study guide: Davis, Bridgett M., The World According to Fannie Davis: My Mother's Life in the Detroit Numbers. Hachette Book Group, New York, New York, 2019. Kindle AZW file.

Bridgett Davis was born in Detroit, Michigan, to Fannie and John T. Davis. Bridgett was the youngest child of the family and was born after her mother had launched a business based on the Numbers in Detroit. Numbers referred to the business of taking bets on a three-digit number, with the winning numbers determined and announced in various ways over the years. A black man came up with the idea in the early 1900s, and it became an important part of black culture. The game allowed players to bet a small amount of money on a three-digit number, with a 500-1 payout for winners. Playing Numbers became an integral part of the social network and a multi-million-dollar business, despite the fact that it was illegal.

Fannie and John T. had married in Nashville, Tennessee, but joined the many families moving North during the 1950s and 60s. They were hoping for better jobs and better race relations in Detroit, Michigan, but they found that was not the case. John T. worked at an automobile factory, but he was often out of work and the family lived in terrible conditions when they arrived in the city. Fannie eschewed working a menial job that would do nothing to actually get the family out of their poverty and would require that she leave their children to take care of each other. She began to work as a bookie, taking bets from people in her neighborhood and delivering them to a big Numbers banker. Her earnings got the family out of the abject situation, but she wanted more and eventually gathered enough money to become her own banker. That meant her profits increased, but so did the risks. A major hit by several of Fannie's customers could bankrupt her entire operation. The business was illegal, and the constant fear of arrest was very real.

By the time Bridgett was born, Fannie was doing well, and Bridgett came home to a new set of nursery furniture. When Bridget was still an infant, Fannie bought a house in an upper-class neighborhood. The house on Broadstreet was large and welcoming, and Fannie ran the numbers from there for the next few years. There were occasional taxes on the money flow, and Bridgett worried about some aspects of her mother's life. Fannie provided the basics and some luxury items for her family. The children always had nice clothes and had opportunities that were not afforded to everyone. Fannie was generous with others as well, and she used her money to buy things for herself. The family traveled occasionally, though Fannie was essentially tied to the home phone six days a week.

By the time Bridgett was a teenager, she had come to take her mother's largess for granted. Fannie threw an elaborate party for Bridgett's 16th birthday, then bought Bridgett a car. When Michigan legalized a lottery, Fannie's business took a hit, but she found a way to use the lottery to her advantage. She continued to take bets from her customers. However, rather than depending on some random person that no one actually knew to generate that day's winning number, Fannie paid out based on the state's drawing that day. That meant her customers knew the winning number at the same time Fannie did. Most Numbers owners were soon using the same method. Though Fannie's customers had the option to play the legal lottery, many continued to play with Fannie instead. Many had an innate distrust of the government and enjoyed the social interaction they got with Fannie.

Through the ups and downs of the business, Bridgett graduated high school and chose an elite college in the South. She later realized that she had not even asked Fannie if they could afford the tuition. She just assumed her mother would come through, as she always had. Over the coming years, Bridgett graduated college, spent some time traveling, and moved to New York. She completed an advanced degree, became a teacher, and tried to write. During the 1980s, three of Bridgett's siblings died. Her oldest sister, Deborah, died of a heart attack in her 30s. Her brother Anthony was shot during a fight in a bar, and her sister Dianne was murdered by her husband, who then killed himself. Bridgett wanted to write about the way her mother coped with her grief and continued to take care of her other children, but she found that story was superficial without the Numbers business. Because the Numbers business was illegal, she could not write about that aspect of her mother's life.

Bridgett was shocked when her mother was diagnosed with cancer, and she initially convinced herself that Fannie would be fine. Bridgett had been heartbroken when her father died and struggled with guilt that she had not done enough for him, but she fell into that same routine when Fannie was ill. Bridgett did not go home as often as she could have, but she remained with Fannie in the final days of her illness. Bridgett's sister Rita kept the Numbers business going for a time. As the memoir comes to a close, Bridgett said she played New York's Numbers lottery, a legal game, six days a week after her mother's death. It was partly a nod to her mother's legacy and choosing the numbers and seeing others who played were an important part of her daily life.

More summaries and resources for teaching or studying The World According to Fannie Davis.

The World According to Fannie Davis from BookRags. (c)2022 BookRags, Inc. All rights reserved.