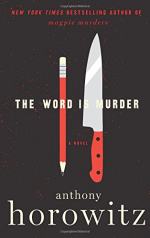 Anthony Horowitz
This Study Guide consists of approximately 66 pages of chapter summaries, quotes, character analysis, themes, and more - everything you need to sharpen your knowledge of The Word Is Murder.

The Word Is Murder Summary & Study Guide includes comprehensive information and analysis to help you understand the book. This study guide contains the following sections:

This detailed literature summary also contains Quotes and a Free Quiz on The Word Is Murder by Anthony Horowitz.

The following version of this book was used to create this study guide: Horowitz, Anthony. The Word is Murder. Century, 2017.

As the narrative opens, Diana Cowper goes to Cornwallis and Sons, a funeral parlor, to arrange her funeral. Someone strangles her to death six hours later. Anthony Horowitz (a fictionalized version of the book's actual author) becomes involved when Daniel Hawthorne, an ex-policeman who was fired for mysterious reasons, approaches him. Hawthorne asks Anthony to write a book about him. Hawthorne, who now serves as a consultant helping the police solve difficult cases, is working with the police to find Diana’s killer. The book Hawthorne envisions centers on this case.

Anthony, who knows Hawthorne and does not like him, initially refuses the project because he writes fiction and believes that Hawthorne needs a journalist. However, he later wonders whether he did the right thing because, although he is a famous writer, he is between projects. Then a woman confronts him at a literary festival about the fact that he only writes fiction. The confrontation makes him think about his writing. As a result, he calls Hawthorne and tells him that he will write the book.

Now that he is Hawthorne’s ghostwriter, Anthony shadows Hawthorne as Hawthorne works to solve the case. The two of them go to Diana’s house to study the murder scene that the police recreated for Hawthorne’s benefit. While there, Anthony meets Detective Inspector Meadows, the detective officially assigned to the case. Hawthorne knows him, and the two men dislike each other. Hawthorne studies the scene and Meadows tells him about a text message Diana sent her famous actor son, Damian, right before she died. The message implicates that there might be a correlation between Diana’s death and a hit-and-run accident which killed a young boy and left his brother, Jeremy Godwin, suffering from brain damage. As a result, Jeremy’s mother, father, and Jeremy himself, become suspects.

However, there are other people Hawthorne wants to question. The duo talks to Diana’s part-time maid, Andrea Kluvanek and Raymond Clunes, a theater producer. Diana recently lost money on one of his productions, and the two of them had lunch together on the day of her death. They also interview the funeral director at Cornwallis and Sons, Robert Cornwallis, and his cousin, Irene, who also works at the funeral parlor. Andrea admits that she took money from Diana’s house and a note from a man who was threatening Diana when she found her body. She thinks that this man killed Diana’s cat. Raymond says that he still had a good relationship with Diana before she died, but that Jeremy’s father, Alan Godwin, had been trying to get money from her and she was worried about her missing cat.

After the interview with Raymond, Hawthorne reveals that he is homophobic. Anthony has a hard time deciding how he can make Hawthorne his hero given that he has this trait. He is considering giving up the project when Hawthorne tells him that they are going to talk to the Godwins next. They talk to Jeremy’s mother, Judith, Jeremy, and Mary, the nanny who was with the children when the accident occurred. They later talk to Jeremy’s father who no longer lives with the family. He admits that he was trying to get money from Diana, but says that he did not kill her.

Before Hawthorne can find Diana’s killer, someone kills Damian. Damian returned to London to attend his mother’s funeral with his companion, Grace Lovell and their child, Ashleigh. Someone kills him in his home when he returns from the funeral after hearing a nursery rhyme coming out or his mother’s coffin. Hawthorne realizes that he is a target, but arrives too late to save him.

New suspects arise in the form of Grace who inherits a lot of money due to Damian’s death and her father who disliked Damian. A further conversation with Grace reveals that in acting school, Damian got the role of Hamlet because Dan Roberts, who had originally been cast in the role, became ill. Afterwards Damian became a successful actor.

The investigation into how the recording got into the coffin leads the duo to Cornwallis’ house. He did not attend the funeral because he went to see his son perform in a play.

Anthony, who wants to be more than just a writer and Hawthorne’s Watson, goes alone to the acting school and interviews the associate director who remembers Damian and his class. He sees a picture of the group which causes him to go to see Cornwallis because he thinks Cornwallis knows more than he is telling. He goes alone because he wants to solve the case before Hawthorne does. However, while he is there, he realizes that Cornwallis is the killer. Cornwallis is about to kill Anthony when Hawthorne arrives and saves him.

As it turns out, Cornwallis is Dan Roberts. As a result of not playing Hamlet, Cornwallis did not get the agent he wanted and did not become a successful actor. He blamed Damian for this. When Damian’s mother happened to walk into his funeral parlor, he saw the opportunity to lure Damian to London by killing his mother. The rhyme in the coffin was from an event when they studied acting together and Damian realized this. This is why he left. Diana’s message was meant to warn him about Cornwallis. She wrote Laertes. However, the auto-corrector changed the word to lacerated.

Anthony starts to write the book, but feels that he does not know enough about Hawthorne’s character to do so. He decides that he needs to see where he lives. He has the address and arrives unannounced. While there, they discuss the narrative’s title and Anthony sees a picture of Hawthorne’s ex-wife who he recognizes as the woman he met at the literary festival. The revelation that Hawthorne manipulated him to get him to write the book makes him so mad that Anthony almost calls off the deal. However, he writes the book that readers are currently reading in the end.

More summaries and resources for teaching or studying The Word Is Murder.

The Word Is Murder from BookRags. (c)2022 BookRags, Inc. All rights reserved.