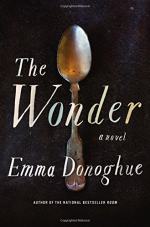 Emma Donoghue
This Study Guide consists of approximately 61 pages of chapter summaries, quotes, character analysis, themes, and more - everything you need to sharpen your knowledge of The Wonder.

The Wonder Summary & Study Guide includes comprehensive information and analysis to help you understand the book. This study guide contains the following sections:

This detailed literature summary also contains Quotes and a Free Quiz on The Wonder by Emma Donoghue.

12 years after the Irish Famine ends in 1847, nurse Elizabeth (Lib) Wright has been hired by residents of a small village in the Irish Midlands to watch Anna O’Donnell, an 11-year-old Roman Catholic girl who—according to the newspapers and people who have met her—has not eaten for four months.

Many people are convinced that Anna’s survival must be a true religious miracle, while others believe that her parents are somehow feeding her on the sly and that they are using her rapidly growing fame to make money. Although logic tells them that staying healthy without eating is impossible, thanks to an article that has appeared in the newly established newspaper The Irish Times, Anna has gained a certain notoriety. Many visitors, both from Ireland and elsewhere, come to see Anna for themselves. In order to determine once and for all whether or not Anna is truly “living on air” (and a few sips of water), prominent residents of the village, including the doctor and the priest, form a committee responsible for hiring nurses to watch over Anna 24/7, never leaving her alone. After a fortnight, each nurse—without any discussion with the other--is expected to report their findings to the committee. This way, the committee feels, Anna’s survival will either be confirmed as a miracle or, alternatively, she will be revealed as a fraud.

Lib Wright, a British nurse who has trained under Florence Nightingale in the Crimea, shares the nursing duties with Sister Michael, a Roman Catholic nun. Motivated by a healthy dose of skepticism, disdain, and her own ego, Lib is sure that scientific knowledge, impartiality, and an inherent distrust of anything that she cannot see and quantify will allow her to make short work of the job at hand. She is positive that it will not be necessary for her to stay the full two weeks, that in this village of uneducated and devout people she will have no difficulty whatsoever proving that they are as gullible as she believes them to be.

Feeling under-appreciated at the hospital where she works and unencumbered by family or marital ties (she has been widowed after less than a year of marriage), Lib jumps at the chance for something new, but when she arrives she discovers that her only function is to keep watch over Anna, to somehow discover the truth about whether or not she is receiving some nourishment, and, if so, to find out the feeding is taking place. After speaking to the village doctor, Dr. McBrearty, and finding him to be old and—in her view—woefully incompetent, Lib is even more convinced that her training and superior knowledge will make short work of the problem at hand. She imagines newspapers reporting on her discovering the hoax and believes that this sort of fame might help her find a position where she is treated with the respect that her training deserves.

Lib’s nationality, superior education, and religious upbringing set her off from the villagers. Consequently, she approaches her meeting with the Roman Catholic O'Donnells the morning after her arrival with a distinct sense of superiority that the meeting does very little to dispel.

Over the next days, Lib stops the visitors and establishes specific routines which must be followed: no one is to interact with Anna outside the nurses’ presence and there is to be no physical contact between Anna and anyone, the sole exception being her mother’s kisses in the morning and again in the evening before bed. Lib meets again with Dr. McBrearty, although she comes away from that meeting no more satisfied than before.

She also becomes acquainted with the journalist William Byrne who has been asked to write an article about Anna’s case. At first Lib is hostile towards him, but as the days go by she begins to understand his point of view more clearly and is willing to acknowledge that perhaps he can be helpful in her quest to understand Anna. Working from his more objective perspective as someone outside the situation, Byrne points out to Lib that perhaps, rather than allowing her to find out where Anna may be getting food, the strictness of the watch may mean that Anna is now truly being denied all access to food. Ultimately, then, instead of helping Anna, Lib’s conscientiousness may be unwittingly aiding in her demise. When Lib arranges for Byrne to meet Anna while she and Lib are out for a walk, it is clear to him that she is, in fact, starving. Taken aback, Lib realizes that science and training are not the way that she will find out the truth about Anna. She must get into Anna’s mind and find out why she has been refusing food. Once Lib begins to delve deeply into the motivations behind the actions of Anna and her parents, she and Byrne formulate a plan to save Anna’s life.

More summaries and resources for teaching or studying The Wonder.

The Wonder from BookRags. (c)2022 BookRags, Inc. All rights reserved.