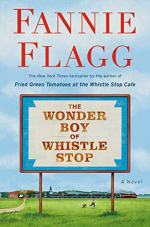 Fannie Flagg
This Study Guide consists of approximately 65 pages of chapter summaries, quotes, character analysis, themes, and more - everything you need to sharpen your knowledge of The Wonder Boy of Whistle Stop.

This detailed literature summary also contains Quotes and a Free Quiz on The Wonder Boy of Whistle Stop by Fannie Flagg.

The following version of the novel was used to create this study guide: Flagg, Fannie. The Wonder Boy of Whistle Stop. Random House, October 27, 2020. Kindle.

The Wonder Boy of Whistle Stop by Fannie Flagg is the sequel to Green Fried Tomatoes at the Whistle Stop Cafe. In this installment, the reader learns that a reduction in railway traffic had closed the small, tight-knit town of Whistle Stop decades ago. More than fifty years later, Whistle Stop native Bud Threadgoode sneaked out of Briarwood Manor, a retirement home, to ride the Amtrak from Atlanta to Birmingham. Bud (a retired army captain and former veterinary clinic owner) and his wife Peggy (an Alzheimer's patient) were living in Briarwood Manor when Peggy passed away. After her death, Bud wanted to see the Whistle Stop railway crossing sign one final time. His trip set off a string of coincidences that led to his daughter, Ruthie, and her friend, Evelyn Couch, revitalizing Whistle Stop and reopening the old Whistle Stop Cafe.

Bud managed to scare his adult daughter, Ruthie, as well as Mr. Merris, the director of the Briarwood Manor, when Bud was discovered missing. Alert bulletins were put out on television, and Bud was located. He had gotten lost trying to find the town of Whistle Stop on foot. Bud was so excited when the paramedics showed up to rescue him that he left his prosthetic arm underneath the tree where he had stayed the night. Bud had lost his left arm in a railroad accident when he was a child in Whistle Stop.

In the hospital, Evelyn Couch, who had been inspired by Ninny Threadgoode when the two met at the nursing home where Ninny lived, recognized Bud from the description given on the news. Ninny had told Evelyn stories of Bud and his growing up years in Whistle Stop. Evelyn called Ruthie and arranged to meet Bud in person. Meanwhile, Evelyn recognized herself in Ruthie and took Ruthie under her wing just the way Ninny had done for Evelyn. The two formed a close friendship.

Evelyn surprised Ruthie by buying the land on which the former Whistle Stop was located and suggesting that they revitalize the town and reopen the Whistle Stop Cafe. They decided it would be a good surprise for Bud. Evelyn and Ruthie waited until they had cleaned up the area and were sure the buildings were structurally sound before they told Bud what they had planned.

Sadly, the revitalization had to be shut down a few weeks later because there was a problem with the deed to twenty acres of land that was between Whistle Stop and the interstate. Without an easement, they could not connect to modern sewer and water lines or have road access for the town. According to the latest deed for the land, the land belonged to Arvel Liggert. Arvel died without a will. His heirs had been fighting over the land ever since. There was no one to sell them the property or grant an easement.

Meanwhile, two boys playing in the woods found Bud’s prosthetic arm, but they believed it was part of a dead body. When the firemen who responded to the call dug around the base of the tree to make sure there was nothing buried, they located a deed to that same piece of property that was in Idgie Threadgoode’s name. Idgie Threadgoode was one of the original owners of the Whistle Stop Cafe. Bud’s mother, Ruth, was Idgie’s partner in business and partner in life.

It turned out that Idgie won the piece of property from Arvel in a poker game. Arvel and Idgie had been enemies since Idgie shot Arvel with buckshot when he tried to kill her cat. One night when Idgie was drunk, Arvel persuaded Idgie to play a hand of poker with him. He intended to take all she had, but he turned out to be the loser. Idgie buried the deed because she did not want Ruth to find out she had been back to the River Club to play poker.

In the present, Ruthie and Evelyn open the Whistle Stop Cafe. Grandchildren of former residents reopen other businesses, including the beauty shop. Ruthie and Evelyn restore the house where Ninny and her husband had lived for Bud and his new wife, Lois. Ruthie manages the cafe. Bud is happy that his hometown is back up and running.

More summaries and resources for teaching or studying The Wonder Boy of Whistle Stop.