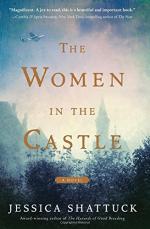 The Women in the Castle Quotes

Jessica Shattuck
This Study Guide consists of approximately 76 pages of chapter summaries, quotes, character analysis, themes, and more - everything you need to sharpen your knowledge of The Women in the Castle.

All right,” Connie said, turning his intense gaze upon her. “Then you will see to it that they are all right. You are appointed the commander of wives and children.
-- Connie Fledermann (Prologue)

Importance: This quote signifies the premise of the story about to unfold. When Connie gives Marianne this directive, she spends years finding the wives and children of the men first gathered in that room in the prologue. This quote re-appears several times throughout the novel, when in times of difficulty or struggle Marianne remembers her purpose and her promise. This quote also resonates with the motif of keeping promises and secrets.

Everything was a distraction from the basic struggle between life and death.
-- Marianne (chapter 4)

Importance: Marianne thinks this to herself after she uses Elisabeth’s communion dress (a symbol) to clean up one of Martin’s bloody childhood accidents. She realizes that when she saved the dress she had no idea what the...

More summaries and resources for teaching or studying The Women in the Castle.

The Women in the Castle from BookRags. (c)2022 BookRags, Inc. All rights reserved.