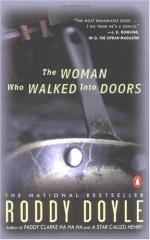 The Woman Who Walked Into Doors Summary & Study Guide

Roddy Doyle
This Study Guide consists of approximately 32 pages of chapter summaries, quotes, character analysis, themes, and more - everything you need to sharpen your knowledge of The Woman Who Walked Into Doors.

The Woman Who Walked Into Doors Summary & Study Guide Description

The Woman Who Walked Into Doors Summary & Study Guide includes comprehensive information and analysis to help you understand the book. This study guide contains the following sections:

This detailed literature summary also contains Topics for Discussion and a Free Quiz on The Woman Who Walked Into Doors by Roddy Doyle.

Paula, a middle-aged Irish housewife, answers the door to find a police officer, who informs her that her husband, Charlo, is dead. As Paula deals with Charlo's death, she is forced to face the memories of years of brutal abuse at his hands. Paula examines the path that led her to marry the man who would torture and abuse her for seventeen years and how she finally found the strength to kick him out of her house. A year later, he was shot by police after murdering a woman and Paula tries to make sense of her life, for the sake of her growing children.

Paula remembers growing up in a violent Catholic household with little money and many siblings. When she met Charlo, who was already a criminal, Paula fell instantly in love with his bad-boy image and married him to spite her abusive father. After a perfect honeymoon, Paula and Charlo settled into penniless married life as they awaited the birth of their first child, but Charlo became less loving and more cruel as Paula got fatter. Soon he started beating her, and he continued teasing, torturing, and hurting his wife for years, whether or not she was pregnant at the time. He would always go with her to the hospital and the doctors and nurses always believed that Paula was such a drunk that she was always falling down the stairs. Once, Charlo's violence caused Paula to miscarry a baby girl and Paula could never forgive him for that.

Looking back, Paula recalls how she became an empty shell, losing entire days at a time in her haze of alcohol and beatings. Charlo rarely brought in much money from his robberies so that Paula had to keep her children out of the kitchen for fear that they would eat all the food. The only thing keeping her from killing herself was her desire to protect her four children, but in spite of all this, she still loved Charlo. The only outsider who recognized the abuse was Paula's sister Carmel, who herself had suffered at their father's hand. Finally, one day Paula realized that Charlo had raped and abused their teenaged daughter Nicola, and Paula found the strength to resist Charlo. Beating him over the head with a heavy frying pan, she chased him out of the house and demanded that he never come back.

Paula managed to find a job cleaning houses and office buildings and was happy to learn that she could support her own children. There seemed to be hope that Paula's younger children would break the cycle of abuse and crime, and go on to live happy, successful lives. After a year, Paula had no idea what Charlo has been up to, but she learned from the police that he tried to rob a bank by holding the banker's wife hostage. When the job did not go as expected, Charlo beat and murdered his hostage and was shot to death by the police when he tried to run.

More summaries and resources for teaching or studying The Woman Who Walked Into Doors.

The Woman Who Walked Into Doors from BookRags. (c)2022 BookRags, Inc. All rights reserved.