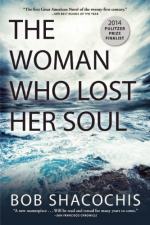 The Woman Who Lost Her Soul Symbols & Objects

The question of whether the human soul exists is part of one of the narrative’s key themes. It also actively manifests in the lives of several of the main characters (including Dottie, Harrington, and Eville Burnette), while experiences of the soul, primarily negative, can be seen indirectly in the lives and experiences of others, including Dolan, Parmentier, and perhaps most significantly, Steven Chambers.

Throughout the narrative, questions of religious faith and spirituality arise in the lives and experiences of several characters. A strong Roman Catholic faith drives both Steven Chambers and Tom Harrington, as well as several secondary characters. Strong Muslim faith drives Osman and several secondary, background characters and confrontations. Strong faith in voudou drives complex relationships and rivalries in Haiti, and also turns out to be the source for the American government’s means of getting Dottie/Renee out...