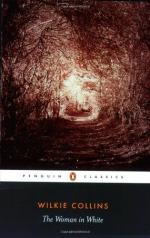 The Woman in White Summary & Study Guide includes comprehensive information and analysis to help you understand the book. This study guide contains the following sections:

This detailed literature summary also contains Topics for Discussion and a Free Quiz on The Woman in White by Wilkie Collins.

The Woman in White by Wilkie Collins, published in 1860, is a Victorian sensationalistst fiction novel. Collins might be considered the father of the modern mystery thriller and detective novel genres. Collins, like his friend Charles Dickens, uses the novel to expose social injustices of his time, in particular, the lack of legal rights afforded married women. Collins presents this story as if holding a trial in which characters present their perspective on the events through narrative, diary excerpts and eye-witness accounts. The main story takes place between July, 1849, and August, 1852. Much of the story is told through the narrative of Walter Hartright, an art tutor who falls in love with a student, Laura Fairlie, who is engaged to Sir Percival Glyde. Percival marries for Laura's inheritance, which he seeks to gain through her written consent or her death. Working with him are the Count and Countess Fosco.

An unwitting accomplice in the downfall of Laura is her ineffective guardian, her uncle Frederick Fairlie. Laura has few allies, but they are fiercely loyal to her. Marian Halcombe, her half-sister, and Walter Hartright face terrific odds against formidable men of power to protect Laura. The title character, The Woman in White, is also an ally of Laura's and a look-alike half sister. The good people eventually prevail with the aid of decent servants, honest solicitors (lawyers) and some luck.

The story includes spies, secret societies, identity theft, mistaken identity, murder, illegitimate births, false imprisonment and romance. Collins weaves an exciting tale to prove a point about the dearth of women's rights. Using women from both high and low classes, he drives the point home with example after example of injustice. Though this is a persuasive argument told in story form, Collins does not fall into preachy narrative. He tells an exciting story that entertains, enlightens and informs.