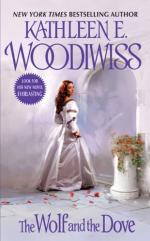 The Wolf and the Dove Summary & Study Guide

Kathleen Woodiwiss
This Study Guide consists of approximately 54 pages of chapter summaries, quotes, character analysis, themes, and more - everything you need to sharpen your knowledge of The Wolf and the Dove.

The Wolf and the Dove Summary & Study Guide Description

The Wolf and the Dove Summary & Study Guide includes comprehensive information and analysis to help you understand the book. This study guide contains the following sections:

This detailed literature summary also contains Topics for Discussion and a Free Quiz on The Wolf and the Dove by Kathleen Woodiwiss.

Aislinn's family is attacked by the Normans under the leadership of Ragnor de Marte. The story opens with Aislinn fighting the fact that she has a rope tied about her neck with the other end held by Ragnor. Her mother, Maida, is being forced to serve the conquerors as are two of the family servants. Aislinn remembers the death of her father, Erland, at the hands of this Norman. Erland had gone out to meet them under a flag of truce, but the demands handed him were so outrageous that he rebelled and was killed in the ensuing melee.

That night, Ragnor takes Aislinn upstairs with the intention of raping her. Aislinn lives through the coming months believing that he had raped her, until she learns that Maida put a sleeping draught in Ragnor's drink. He forced Aislinn also to drink so both fall asleep almost as soon as they are in the room. On the second day, Wulfgar - the knight Ragnor answers to on behalf of William - arrives at Darkenwald and is angry that Ragnor handled the conquest in such a way that there were deaths. Wulfgar forces Aislinn to his own room but doesn't rape her, only chains her to the foot of his bed. His fairness is soon evident to Aislinn and to others, and when Ragnor forces the issue, saying that Aislinn is his by right of conquest, she is allowed to choose. She selected Wulfgar, but Ragnor can't let it go. Much later, when Aislinn has come to care for Wulfgar, she stands at his side during William's coronation. Ragnor again puts forth his claim on both Aislinn and Darkenwald, and William decrees that it will be settled with a joust between the two men. Wulfgar wins but Ragnor still isn't satisfied.

Meanwhile, Ragnor has made a conquest of Gwyneth, Wulfgar's sister. Gwyneth is angry when she discovers that Ragnor had Aislinn first. Her jealousy of Aislinn is evident, and she does whatever she can to make Aislinn's life miserable. She has no kindness for anyone and eventually helps Ragnor with information about Wulfgar's daily plans, so that Ragnor, accompanied by a band of thieves, raids Wulfgar's lands without being captured. When Aislinn discovers that Gwyneth is the traitor, she tells Bolsgar, Wulfgar's father, who goes to warn Wulfgar. While the majority of the men are away, Ragnor's men attack, taking Aislinn and her newborn son, Bryce, with them as hostages. Gwyneth also goes, believing that Ragnor cares for her. Along the way, Ragnor grows tired of Bryce's crying, and Aislinn, fearing that Ragnor will kill the child, leaves him with an old crone they encounter along the way. Wulfgar and Bolsgar follow but become separated. Wulfgar battles Ragnor, but it's Gwyneth, mortally wounded herself, who kills Ragnor, apologizing to Aislinn and Wulfgar for her behavior toward them.

Aislinn and Wulfgar return to Darkenwald, fearful for Bryce's life, to discover that things at the manor are well. Aislinn's mother, Maida, has apparently recovered from her hatred of those who killed her husband - a process begun with the birth of her grandchild. Bolsgar - who had lived his life believing Wulfgar was fathered by some other man - is joyful and reveals that he "bought" Bryce from the old crone and that he is certain that Wulfgar is his son and that Bryce is Wulfgar's because of a family birthmark that appears on every other generation.

More summaries and resources for teaching or studying The Wolf and the Dove.

The Wolf and the Dove from BookRags. (c)2022 BookRags, Inc. All rights reserved.