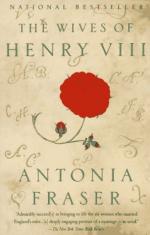 The Wives of Henry VIII Summary & Study Guide includes comprehensive information and analysis to help you understand the book. This study guide contains the following sections:

This detailed literature summary also contains Topics for Discussion and a Free Quiz on The Wives of Henry VIII by Lady Antonia Fraser.

The Wives of Henry VIII is a study of the six wives of one of the most famous English kings by historical writer Antonia Fraser. In this book, Fraser attempts to separate these six remarkable women from the husband who made them all famous. Fraser looks at the divorce that Catherine of Aragon refused to accept for the remainder of her life, the lack of sons that led to Anne Boleyn's demise, and the celebrated birth of the first surviving son that made Jane Seymour the most beloved of all Henry's six wives. Fraser discusses the failure of Henry's marriage to Anna of Cleves, the betrayal of Katherine Howard, and the final companionship Henry found with widow, Catherine Parr. The Wives of Henry VIII succeeds in destroying some of the misguided beliefs long held against many of these women and setting the record straight. It finally reveals to readers how Henry VIII's deep-seated desire to have a male heir created and destroyed six Queens of England.

Catherine of Aragon was the daughter of Catholic Kings of Spain, Isabella of Castile and Ferdinand of Aragon. While still a toddler, Catherine was promised to the Prince of Wales, the son of Henry VII. When only fifteen, Catherine traveled to England to meet her promised husband. At fourteen, Arthur was small and frail, smaller than even petite Catherine, due to his premature birth and frail health. The marriage took place as planned although Arthur was too young and immature to consummate the union. Within six months, Arthur would be dead, leaving young Catherine a widow in a foreign country.

Catherine would remain in England at her father's request as plans were being made for Catherine to wed Arthur's younger brother, Henry. However, the failure of Catherine's father to pay the remainder of her dowry caused Henry VII to keep Catherine as a guest in his country even though he decided not to have young Henry marry her. For seven years, Catherine would live at the mercy of Henry VII, often going without enough food to feed herself and her servants for days at a time. Finally discouraged by Henry VII's actions, Catherine began to arrange her return to Spain. A short time later, the old King died.

Catherine and Henry VIII married six weeks after the death of Henry VII. This marriage would appear a happy one to everyone for more than eighteen years. Catherine would become pregnant many times during the course of her marriage. Unfortunately, Catherine's only surviving child was a girl, named Mary.

Henry VIII became infatuated with Anne Boleyn. With the hope of having a male heir with Anne Boleyn, Henry VIII began searching for ways to get out of his long-time marriage to Catherine of Aragon. Henry was pointed to a passage in the Bible that says a man should not marry his brother's wife as such a marriage would curse them with no children. Henry took this as an explanation as to why all of Catherine's male children died. Henry began to fight for a divorce on the grounds that his marriage to Catherine was never legitimate in the first place.

Anne would give birth to a baby girl a few months after her marriage to Henry. Two more pregnancies, a stillbirth and a miscarriage, would cause Henry to begin doubting Anne's ability to ever provide him with a male heir. Shortly after her last pregnancy, Anne was arrested and charged with treason under the accusation that she had committed infidelity. Anne was beheaded.

Henry VIII married Jane Seymour within a week of Anne Boleyn's execution. This third marriage would be a happy one that would end in the birth of a son, Edward. However, shortly after the birth of her son, Jane Seymour died. Single again, Henry's advisors began to urge him to marry again, to have more male children in case the one surviving son would succumb to the high rate of infant mortality common at the time. Henry began looking over candidates. In the end, Henry chose Anna of Cleves.

Henry claimed to have found great happiness in his marriage to Katherine Howard despite the fact that the Queen did not become pregnant during their brief marriage. After only a short time together, the King learned that Katherine Howard had had a lover as a teenaged girl and that she was carrying on a flirtation during her marriage with a courtier of the King's court. Katherine was arrested and beheaded for infidelity.

The Wives of Henry VIII from BookRags. (c)2022 BookRags, Inc. All rights reserved.