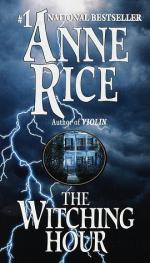 Anne Rice
This Study Guide consists of approximately 59 pages of chapter summaries, quotes, character analysis, themes, and more - everything you need to sharpen your knowledge of The Witching Hour.

The Witching Hour: A Novel Summary & Study Guide includes comprehensive information and analysis to help you understand the book. This study guide contains the following sections:

This detailed literature summary also contains Topics for Discussion on The Witching Hour: A Novel by Anne Rice.

The Witching Hour is an epic novel describing the influence that a spirit called Lasher has over the Mayfair family. The thirteenth witch in the family, Dr. Rowan Mayfair, and her new love, Michael Curry, work with an occult organization called the Talamasca and its representative, Aaron Lightner, to resist Lasher's attempts to be born into flesh. However, Rowan is torn between her scientific curiosity, and her resolve to kill Lasher.

Part One introduces Michael, Rowan, and Aaron and the Mayfair family. Michael grows up in New Orleans but moves to San Francisco after the death of his father. Rowan is the daughter of Deirdre Mayfair, but Rowan is adopted at birth and grows up in San Francisco. Rowan rescues Michael from drowning. After the rescue, Michael has a new ability to see images when he touches things. He also remembers fragments of a vision and a mission. Rowan is intrigued by his power, because she has her own terrifying power to kill by telekinesis. When Michael and Rowan finally connect, they fall in love. Michael goes back to New Orleans. Though Rowan has sworn never to try to find out about her birth mother, she finds that promise worthless when she finds out about Deirdre's death. She follows Michael to New Orleans. Aaron approaches Michael for membership in the Talamasca, and invites him to read the Mayfair history.

Part Two presents the history of the Mayfairs collected by the Talamasca, starting in the mid-1600s and following them to France, Saint Domingue, and finally New Orleans. Michael believes that his mission is to somehow stop the spirit Lasher from achieving its ambition. Rowan attends Deirdre's funeral and is amazed by the enormous family ready to accept her as the new legacy designee. Rowan meets with Deirdre's disagreeable aunt Carlotta, and kills the old woman accidentally in her anger. Rowan reads the Mayfair history and decides to stay in New Orleans and live in the house with Michael, embracing the large Mayfair family.

In Part Three, Michael and Rowan renovate the house and plan to get married. Lasher does not interfere or show himself, except for placing the family emerald necklace around Rowan's neck one night. Rowan, Michael, and Aaron talk about their plans to fight Lasher when the time comes.

In Part Four, Rowan is expecting a baby. She meets with Lasher while Michael is out of town. She wants to lure Lasher into flesh, so that she can kill him. However, Lasher takes her baby, merges with the embryo's cells, and grows them into a man. When Michael arrives, Lasher pushes Michael into the pool, where Michael drowns again and sees a hell where all of the Mayfair witches are waiting to repeat Lasher's rebirth themselves. Michael is rescued, but Rowan and Lasher leave so that Rowan can study Lasher's cells. In the Epilogue, Michael waits at the First Street house, now empty of any supernatural forces, hoping for Rowan to successfully kill Lasher and return to him.

More summaries and resources for teaching or studying The Witching Hour: A Novel.

The Witching Hour: A Novel from BookRags. (c)2022 BookRags, Inc. All rights reserved.