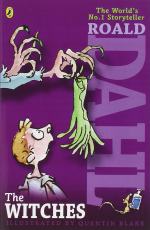 The Witches Summary & Study Guide includes comprehensive information and analysis to help you understand the book. This study guide contains the following sections:

This detailed literature summary also contains Quotes and a Free Quiz on The Witches by .

“The Witches” is a children’s horror novel by Roald Dahl in which an unnamed seven-year-old boy and his grandmother seek to bring down all the witches of the world before the witches kill all the children around the globe. When the novel begins, the boy – who serves as narrator – explains that witches are real, and are not the silly characters seen on Halloween and in movies. Instead, real witches are evil demons in human form that seek to kill all children. The narrator explains that witches are so dangerous because they are difficult to distinguish from regular women, but may be given away by a few telltale signs. Some of these include blue spit, baldness, wigs, a strong sense of smell, and a lack of toes. All of these things, the narrator explains, have been taught to him by his grandmother.

The narrator seeks out a quiet, unused room in the hotel to train his mice, but selects a room where an organization calling itself the Royal Society for the Prevention of Cruelty to Children is due to meet. When the women enter, the narrator decides to hide rather than disrupt the meeting. As it turns out, the 85 members of the RSPCC are actually England’s witches in disguise, attending their annual meeting with the Grand High Witch. The Grand High Witch unveils a secret plan to buy candy shops, and to lace candy with Formula 86 Delayed Action Mouse-Maker, which will turn anyone who eats the candy into mice. The candy will be given away free to children. A test is performed on another boy staying at the hotel named Bruno Jenkins. The witches are thrilled to see Bruno turn into a mouse. It is then that the Grand High Witch and the other witches discover the narrator. They force him to drink Formula 86, which turns him into a mouse.